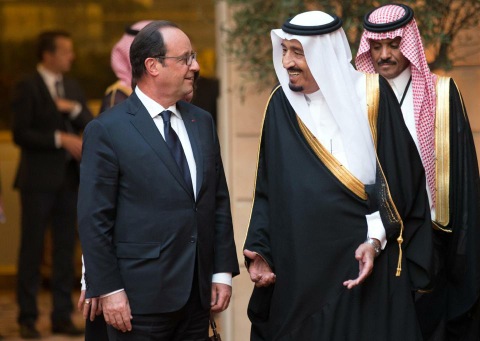 France and Saudi Arabia are close to signing a $3 billion arms deal for Lebanon, the Elysee Palace said Monday following talks between President Francois Hollande and the Saudi crown prince.

“It will not be signed Monday but it is being finalised,” an aide to the president said.

The deal is for military equipment and arms to be supplied to Lebanon’s army.

Hollande told an official dinner at the Elysee presidential palace attended by Prince Salman bin Abdul Aziz, who is also the Saudi deputy prime minister and defence minister, that Lebanon was a “great but vulnerable country” which “needs security”.

“We have come together, Saudi Arabia and France, to help Lebanon on the condition that it also helps itself, for its own security,” Hollande added, without commenting directly on the joint contract.

The deal comes as Beirut faces the threat of jihadists on its border with Syria. More than a million refugees have fled the war in Syria by escaping to Lebanon, according to figures from the United Nations.

Hollande added that France and Saudi Arabia have a “shared priority of peace and security in the Middle East”.

Salman is due to hold talks with French Prime Minister Manuel Valls on Tuesday.

He is also due to meet Foreign Minister Laurent Fabius on Wednesday for talks over the situation in Iraq and Syria, where jihadists have seized swathes of territory and are terrorising Christians and other minorities.

Last week Hollande rejected any cooperation with Syrian President Bashar al-Assad whom he accused of being a “de-facto ally” of Islamic State militants, after the regime said it was willing to work with the international community to tackle the jihadists.

And in comments carried on national TV at the weekend, Saudi Arabia’s King Abdullah warned the West would be the next target of the jihadists sweeping through Syria and Iraq, unless there is “rapid” action.

“If we ignore them, I am sure they will reach Europe in a month and America in another month,” he said in remarks quoted on Saturday by the Asharq al-Awsat newspaper and Saudi-backed Al-Arabiya television station.

The visit comes just over two weeks after another member of the Saudi royal family, Prince Abdul Aziz Bin Fahd, fell victim to a brazen heist in Paris when a gang of heavily armed bandits hijacked the lead vehicle of his 10-car convoy and stole at least 250,000 euros and documents.