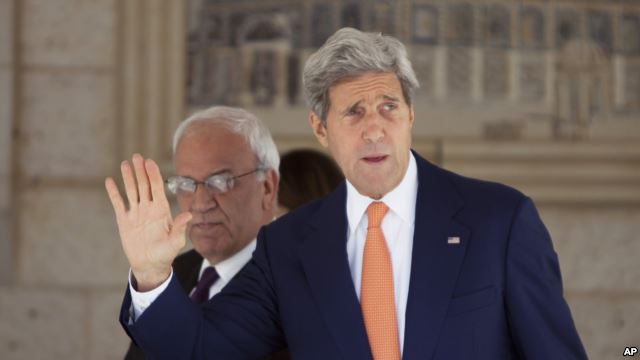 Erekat and intelligence chief Majid Faraj will hold a series of meetings with senior officials in Washington in which they will press the case for Palestinian statehood, amid frustration after a year of talks between Israel and Palestinian Authority President Mahmoud Abbas collapsed in April.

The discussions with Kerry will focus on establishing “a timeframe for ending Israel’s occupation to be agreed as soon as possible and not after the end of this year”, said a Palestinian official familiar with the plan Erekat will lay out.

In an interview with Palestinian TV last week, Abbas said it should only take “half an hour or an hour” to delineate the borders of a Palestinian state, since the United States agreed they should be based on the 1967 borders that existed before the war in which Israel captured the West Bank and East Jerusalem.

“There’s either a political solution or there isn’t,” he said. “But going here and there, up and down, talking and not talking – it’s been 20 years and nothing has happened.”

If there is no agreement on borders in coming months – at least by the end of the year – Abbas said he would have no choice but to push ahead with unilateral statehood moves, a threat he has made before and carried out incrementally.

The first step would be to seek a resolution in the United Nations Security Council calling for a deadline for ending Israel’s 47-year occupation of Palestinian territory.

If it were drafted, such a resolution would probably be vetoed by the United States, which has said it wants only a negotiated solution to the conflict.

Anticipating that veto, the Palestinians say they would then push ahead with plans to join the International Criminal Court, which could open the way for proceedings against Israel. They would also sign up to a range of international treaties and organizations that help denote statehood.

“We ask the Security Council, I want a political solution, meaning two things: the 1967 borders and ending the occupation over a set period lasting as little time as possible, and that’s the end of it,” Abbas told Palestinian TV.

Israel accepts the idea of a ‘two-state solution’ – meaning an independent and democratic Palestinian state living alongside Israel – but has not accepted the 1967 borders as the basis for final negotiations, citing security and other concerns.

It is not clear when negotiations between Israel and the Palestinians might resume. They broke off in April after Abbas took steps towards forming a unity government with the Islamist group Hamas, which is dominant in Gaza.

Tensions between Hamas and Abbas’s more secular Fatah party have only increased since, while opinion polls show that Hamas is now preferred by most Palestinians.