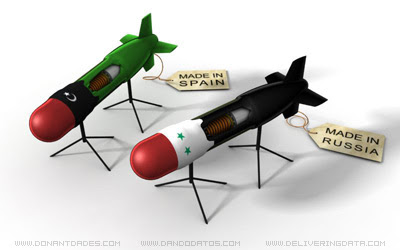 Islamic State of Iraq and Syria (ISIS) militants have used cluster munitions in Syria in at least one location and Syria’s regime is continuing to use the widely banned weapon, Human Rights Watch said Monday.

They were deployed in fighting around the town of Ayn al-Arab in Aleppo province, near the border with Turkey, in clashes between the militant group and local Kurdish fighters.

The group said it was believed to be the first time ISIS had used cluster bombs, and it was unclear how it had acquired them.

Cluster munitions contain dozens or hundreds of small bomblets and can be fired in rockets or dropped from the air.

They spread explosives over large areas and are indiscriminate in nature, often continuing to maim and kill long after the initial attack when previously unexploded bomblets detonate.

The weapons have been used by the Syrian government as well in its battle against rebels seeking to overthrow President Bashar al-Assad.

HRW said Syrian government forces had used at least 249 cluster munitions since mid-2012, according to video and film evidence, witness accounts, and research.

Syria is not a party to the Convention on Cluster Munitions, which has also not been signed by the United States.

HRW urged all members of the international community to accede to the treaty, and also repeated a call for arms embargoes on the Syrian government and any other party committing abuses in the country’s conflict.

“Any use of cluster munitions deserves condemnation, but the best response is for all nations to join the treaty banning them and work collectively to rid the world of these weapons,” said HRW arms division director Steve Goose.

“The UN Security Council should impose an arms embargo on the Syrian government and other armed groups that commit systematic or widespread rights abuses,” the group added in the statement.

More than 191,000 people have been killed in Syria since the conflict there began in March 2011, according to the United Nations.