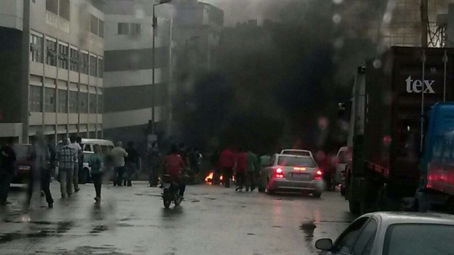 Families  of the   hostages of  the Lebanese armed Forces and  Internal Security Forces blocked roads across Lebanon in a bid to press the government to expedite the  release  of their relatives held by jidadists  from Syria.

According to security  sources the angry protesters erected sand mounds and parked cars in the middle of main roads in Abdeh, Wadi Jamous and Mohammara in the northern Akkar region, as well as in Minnieh near Tripoli.

Similar protests were staged in Bar Elias in the Bekaa area, as relatives of the hostages cut off the main road leading to the city of Zahle.

The old airport road at Ouzai in Beirut was  also blocked by the families of the abducted soldiers.

The road in Chouifat , a  south east suburb of the capital Beirut witnessed  tire burning by the protesters

In Baaqlin in the Shouf  region of Mt Lebanon , the family of a captive soldier blocked the main roundabout linking the town with nearby Beiteddine and Mukhtara, the hometown of MP Walid Jumblatt.

About  29 Army troops and Internal Security Forces personnel were captured by militants from the Nusra Front and ISIS during a five-day showdown in the border town of Arsal last month.

Five captives  were released on Sunday  by Nusra Front and  the body of one soldier beheaded by ISIS was handed over to the army today. The militants have submitted a list of demands to the government, including the release of Nusra commander Imad Jomaa and other Islamist prisoners /  Jomaa’s  arrest triggered the clashes in Arsal  last month