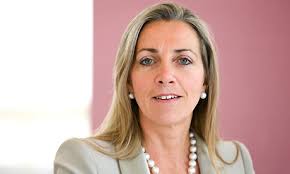 Rona Fairhead, the former head of the Financial Times Group, has been chosen as the new chairwoman of the BBC Trust.

Culture Secretary Sajid Javid said Mrs Fairhead was the preferred candidate to replace Lord Patten, who quit in May.

Mrs Fairhead, 53, will be the first woman to chair the trust, which is the body in charge of overseeing the BBC.

She said she was “under no illusions about the significance and the enormity of the job” but was “excited” to have the chance to lead the BBC.

“The BBC is a great British institution packed with talented people, and I am honoured to have the opportunity to be the chairman of the BBC Trust,” she said.

Mrs Fairhead was chairwoman and chief executive of the Financial Times Group between 2006 and 2013 as part of a 12-year career with its owner, Pearson.

In 2012, Mrs Fairhead – a non-executive director at HSBC and PepsiCo – became a CBE, receiving the award for services to UK industry.

Earlier this year she was appointed a British business ambassador by the prime minister.

Lord Patten, who was appointed in 2011, left the job of chairman on health grounds following major heart surgery.

A BBC spokeswoman said there was an appointment process that still needed to be completed.

“But we welcome the announcement of Rona Fairhead as the preferred candidate for chair of the BBC Trust,” she said.

“We will comment further once the process is complete.”

On of the Hurdles Mrs Fairhead still has to negotiate before being confirmed in the job will be facing questions from MPs on the Media Select Committee on 9 September.

‘Big job’
The appointment was ultimately decided by The Queen on a recommendation from Culture Secretary Sajid Javid.

“Her experience of working with huge multinational corporations will undoubtedly be a real asset at the BBC Trust,” he said.

“I have no doubt she will provide the strong leadership the position demands and will prove to be a worthy champion of licence fee payers.

“I am sure that under Rona’s leadership the BBC will continue to play a central role in informing, educating and entertaining the nation.”

Being in charge of the BBC Trust is a “big job”, said BBC media and arts correspondent David Sillito.

“You are overseeing the BBC, but you are also in many ways responsible for being the cheerleader, defending it when politicians have got something to say about the BBC,” he added.

Negotiations are about to begin over the BBC’s royal charter, which sets out the corporation’s purposes and the way it is run. It is reviewed every 10 years, and the current charter runs until the end of 2016.

“Many congratulations to Rona Fairhead who has been appointed as the new BBC Chairman. I know she will be excellent,” she said.