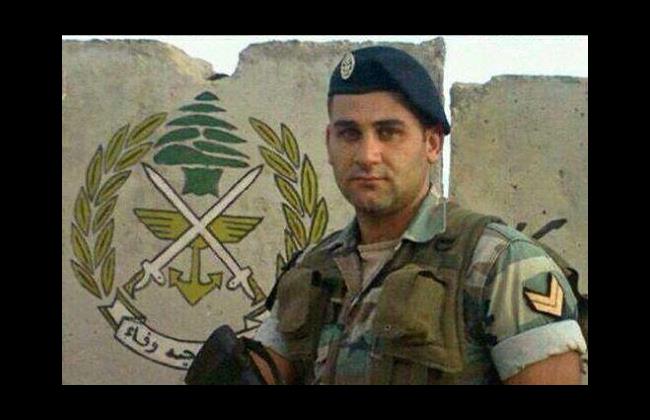 Lebanese soldier Ali al-Sayyed who was kidnapped and beheaded by the islamic State terrorists
Share:

Islamic State militants beheaded a Lebanese soldier who was one of 19 captured by hardline Syrian Islamists when they seized a Lebanese border town for a few days this month, a video posted on social media showed on Saturday.

The soldier, recognizable as Ali al-Sayyed, a Sunni Muslim from north Lebanon, was shown blindfolded with his hands tied behind his back, writhing and kicking the dusty ground while a militant announces he will be killed. Another militant then beheads him.

Islamic State, which declared a “caliphate” in June in parts of Iraq and Syria under its control, has been cited as a major security threat by Western governments since posting a video in August of the beheading of U.S journalist James Foley.

The Lebanese army declined to comment, but security and Islamic State sources confirmed the latest beheading.

Hours later, the group posted a second video showing nine other soldiers begging for their lives, urging their families to take to the streets in the next three days to demand the release of Islamist prisoners as a condition to escape al-Sayyed’s fate.

Earlier this month, several Syrian groups, including Islamic State and Nusra Front battled the Lebanese army after the arrest of rebel commander Emad Gomaa in the border town of Arsal. Gomaa is a Nusra commander who switched affiliation to Islamic State but remained popular among Nusra fighters.

The militants seized Arsal for five days before withdrawing to a mountainous border region, taking the 19 captive soldiers with them.

Most of the soldiers were taken by Islamic State militants while Nusra kept a few soldiers and a number of policemen.

On Saturday, Nusra released four soldiers and a policeman, all Sunnis, a source close to the group said. The circumstances of their release were not immediately clear.

The militants have demanded the release of Gomaa and several Islamists jailed since a 2007 insurrection by an al Qaeda-inspired group at a Palestinian refugee camp in north Lebanon.