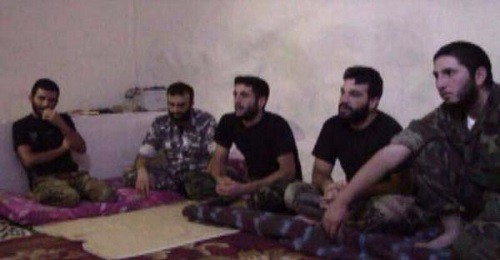 The four soldiers and one police officer were abducted in early August, when Syria-based militants clashed with security forces in Lebanon.

Three groups, including Al-Nusra Front and the Islamic State group, are holding another 15 Lebanese soldiers and 14 police captive.

The release came hours after a video posted to social media showed the beheading of a Lebanese soldier by Islamic State militants. The extremist group decapitated American journalist James Foley and shared similar gruesome footage on the Internet earlier this month.

A leader of the Lebanese branch of the al-Qaida-linked Al-Nusra Front said on Saturday that the front had released five Lebanese Sunni troops, out of a total of 18 troops, it kidnapped during clashes with the Lebanese army earlier this month.

“We have handed the five troops to one of the notables of Arsal and they should be released tomorrow morning,” the leader told Anadolu Agency on condition of anonymity.

The Al-Nusra Front leader said the five freed troops would spend the night at a mosque in Arsal and that they would be released on Sunday morning.

He added that he and fellow Al-Nusra members did not receive any  ransom to release the troops.

“Our fight is not against Sunnis,” the leader said.

The demands of the movement include the release of Islamists held by the Lebanese government and keeping the Shiite Lebanese militant movement Hezbollah out of prisoner exchange talks.

Al-Nusra Front is one of the groups the U.N. says is involved in ongoing violence against its peacekeepers in the Israeli-occupied Golan Heights, where soldiers at one U.N. camp came under heavy mortar and machine gun fire on Saturday.

Thirty-two Philippine peacekeepers, whose camp had been surrounded since Thursday, made it to safety. Forty more remain confined to their base by rebel groups. There were no immediate reports of casualties.

Philippine Defense Chief Voltaire Gazmin said the militants attacked one of the two camps Saturday manned by the peacekeepers. There were no immediate reports of casualties.

Earlier in the week, the insurgents attacked another Golan Heights camp seizing 44 Fijian peacekeepers from their post in the same region along the Syria-Israel border.

The United Nations has called for the release of the Fijian peacekeepers.

The international organization said Friday it has received assurances from credible sources that the Fijian peacekeepers are “safe and in good health” and that “the intention behind those holding the peacekeepers was to remove them from an active battlefield.”

The name of the group holding the soldiers has not been released.

Both groups of peacekeepers were serving on the U.N.’s Disengagement Observer Force in the Golan Heights.