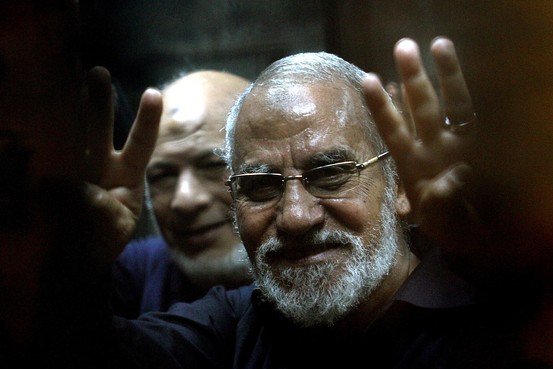 The Muslim Brotherhood’s supreme guide, Mohamed Badie, flashing the “Rabaa” sign, which means four in Arabic, remembering those killed in the crackdown on the Rabaa al-Adawiya protest camp in Cairo last year, on May 8.
Share:
A Cairo court has sentenced Muslim Brotherhood spiritual leader Mohammed Badie and seven others to life in prison on charges of planning riots, murder and sabotage, Egypt’s state news agency said.

The case stems from violence that took place last summer after the ouster of Islamist President Mohammed Morsi, when fighting killed 10 people and injured 20.

Egypt’s MENA agency said the court Saturday also sentenced six Islamists to death in absentia. Under Egyptian law, those sentenced in absentia will face a retrial once in custody.

Mr. Badie has been sentenced to death in another case but can appeal.

Since Mr. Morsi’s ouster, the government’s crackdown on his group and supporters has killed hundreds of people and left tens of thousands detained or facing trials.