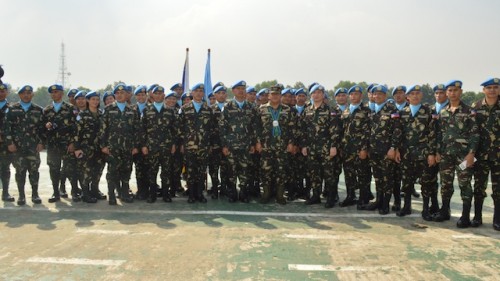 He said in an SMS statement to reporters that the Filipino troops had been “extricated” from one of their two positions but added that another group of Filipino soldiers “is now under attack”.

He was referring to two positions on the Golan Heights where more than 70 Filipino troops had previously been surrounded by Syrian rebels.

The peacekeepers were besieged by rebels on Thursday but defied demands that they give up their weapons. On Friday Syrian fighters took 43 Fijian soldiers hostage on the Golan Heights.

Asked if there was a fresh firefight Saturday, Gazmin replied: “Yes”.

He said the clash took place at “6am, Syria time,” but added that “morale is high” among the troops.

Military spokesman Lieutenant Colonel Ramon Zagala later told AFP that “there is still an ongoing standoff but there was a firefight earlier today”.

“All our troops are safe,” he said, adding that the defence minister and head of the military were monitoring developments. He declined to elaborate further on the incident.

Earlier Saturday, a spokeswoman for President Benigno Aquino said he was “keeping a close watch” on the fate of the troops who were serving as part of the peacekeeping force on the Golan Heights.

The head of Filipino troops on UN missions Colonel Roberto Ancan said in Manila on Friday that “we can use deadly force in defence of the UN facilities”.

Syrian rebels, including fighters from the Al-Qaeda affiliate Al-Nusra Front, stormed a Golan Heights crossing on Wednesday, sparking an exchange of gunfire with Israeli troops.

The rebels then captured 44 Fijian members of the UN Disengagement Observer Force (UNDOF) on the Syrian side on Thursday, forcing them to surrender their weapons and taking them hostage.

Ancan said the rebels then used an English-speaking Fijian hostage to relay their demand to the Filipino peacekeepers to give up their weapons, but they refused.