7 in 10 Palestinians killed in Gaza were civilians , UN says 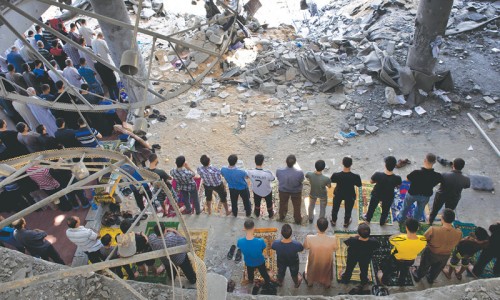 Palestinians perform Friday prayers at the remains of a mosque in Gaza. AFP photo
Share:

The war in Gaza will now continue in a battle between databases to determine who was killed and why.

The most contested number, the one that attracts the most stubborn insistence and ferocious rebuttal, is not the total fatalities on the Palestinian side, the more than 2,100 dead in the Gaza hostilities.

The controversy centers instead on the ratio of civilians to combatants, or as the Israelis call them “terrorist operatives.”

This number will help shape public opinion about the way the war was waged, its cost in human life and whether the hostilities were worth the casualties.

In its most recent count, the U.N. Office for the Coordination of Humanitarian Affairs reports that 2,104 Palestinians were killed in Gaza, including 1,462 civilians, among them 495 children and 253 women. Those U.N. numbers would mean that 69 percent of the total killed were civilians.

By contrast, Israeli Prime Minister Benjamin Netanyahu said this week that Israeli forces­ had killed “approximately 1,000 terrorists,” which would mean that far fewer of the 2,104 Palestinian dead were civilians — roughly 52 percent.

Israeli military forces­ pride themselves on being “the most moral army in the world.” The Palestinians say Israeli bombardment was frequently indiscriminate or directed at targets where the risk of civilian casualties was high.

In Israel, critics charge that the U.N. numbers are inaccurate and biased, in part because the United Nations bases its reports on numbers generated by human rights groups working in Gaza, which they say cannot be trusted.

Reuven Erlich, the head of the Meir Amit Intelligence and Terrorism Information Center in Israel, which has close ties to Israeli intelligence ser­vices, told the Jerusalem Post that one should be “suspicious of all figures from the Gaza Strip.”

Matthias Behnke, the top official in Jerusalem for the U.N. High Commissioner for Human Rights, said, “We feel confident about our process. It is the most elaborate out there. We use a number of sources­. We are on the ground in Gaza. We go out to verify. This puts us in the best available position to assess who is a combatant and who is a civilian.”

A final cease-fire to end hostilities in Gaza was only declared this week, and if past wars between Hamas and Israel in 2009 and 2012 serve as a guide, it will be weeks and perhaps months before complete tallies are released by all sides.

‘Where are their lists?’
From the beginning, the death tolls from Gaza have faced criticism by Israel officials, who say the numbers of civilian deaths have been manipulated by the Islamist resistance movement Hamas, which controls the Gaza Strip.

Children paying a terrible price in Gaza VIEW GRAPHIC
The Israel Defense Forces­ warns on its Web site that “media outlets have relied on Hamas’ statistics when reporting casualties in Gaza, but the terrorist group routinely exaggerates civilian deaths for propaganda purposes.”

But neither the prime minister’s office nor the Israeli military have provided any detailed, verifiable tally of their own to account for their contention that the conflict killed some 1,000 terrorists.

“The Israeli claim of 900 or 1,000 fighters killed is just a claim. Please. Provide your data, the names and circumstances, so we can verify. They criticize us. We are held accountable. Where are their lists?” said Mahmoud Abu Rahma, director of communications for the Al Mezan Center for Human Rights, which is investigating the cause of casualties in the Gaza war.

Through the seven weeks of war, more than a quarter of the population of the Gaza Strip was displaced. The dead and dying were rushed to hospitals under heavy bombardment. Some bodies were buried under rubble for days.

Foreign reporters who visited the morgues were met by chaos. Overwhelmed medical technicians scribbled names in bloody notebooks as relatives fought to retrieve their dead, or bags of their body parts.

But on Facebook and Twitter, one Hamas official, himself a physician, provided a minute-by-minute tally of the dead. From his post at the Shifa Hospital in Gaza City, Health Ministry spokesman Ashraf Al Kidra was in the early days of the war the public face of casualty figures, often appearing on camera in hospital scrubs.

“All the world uses our numbers. We are the only source,” Kidra boasted in an interview during the height of the fighting.

Kidra’s assistants huddled in an office crowded with computers, ears attached to mobile phones, taking reports from hospitals and morgues. Their numbers were fast but raw.

Identifications and ages were sometimes wrong. The given names of a dead man, for example, might not be Mohammed Mahmoud, but Mahmoud Mohammed, and he was not 24, but 26.

While Hamas officials stressed the high numbers of civilian casualties, Kidra and the Health Ministry did not provide any breakdown of combatants and civilians — just names, ages and gender.

Kidra’s position, though, was clear. “They are all civilians,” he said. “All the dead in all the houses, in the mosques, in the cars, in fields and the facilities for the disabled.”

Multiple sources
Despite his assertion, Kidra’s tallies were not the only source of information. They were a tip sheet. Throughout the war, there were three human rights groups in Gaza — two Palestinian and one Israeli — that released information about the dead.

In the forefront was Mezan, whose field operatives could be found, day after day, squeezed into hospital corridors, collecting names and mobile phone numbers.

Mezan and an Israeli human rights group called Btselem are two that provide data to the United Nations. Other sources of information have declined to be named. The United Nations also has a verification team in Gaza that double-checks identities. It also combs Web sites managed by the Palestinian militant factions and by the Israel Defense Forces.

According to Mezan’s current count, 2,168 Palestinians were killed in the Gaza war, and 1,666 of them, or 77 percent, were civilians.

Samir Zaquot, the director of fields operations for Mezan, said it is possible to get at the truth. His field team is working alongside three other Palestinian groups to compile a master database of the dead. About 70 survey workers, armed with a four-page document with 40 questions, are going door-to-door.

After the ground offensive by Israel, Hamas began to withhold the names of its combatants. “They believed if the names became known, the Israelis could target the houses of their families,” Zaquot said.

Israeli military officials said Hamas did so to manipulate the media and highlight civilian casualties.

Lists of “martyred” fighters are beginning this week to appear on banners hung in neighborhoods and posted online by Hamas and other militant factions.

The group Islamic Jihad, the second largest militant brigade after Hamas, announced Friday that 121 of its “soldiers and commanders” were killed in the war.

“This idea that Hamas will hide its martyrs is not possible,” said Mohammed Sabbah, director of the Gaza office of Btselem. “They are proud of their sacrifice.”

A study by the Meir Amit Intelligence and Terrorism Information Center, widely cited by Israel’s supporters, charged that Mezan and other groups in Gaza are integral parts of propaganda campaigns.

Mezan does not get any money from Hamas or the Palestinian Authority. Its communications director scrolled through a year’s worth of press releases from Mezan criticizing Hamas for extrajudicial executions, torture of prisoners and dubious arrests.

On the Israeli side, the Meir Amit study examined the first 152 deaths of the Gaza war and reported that 71 were “terror operatives” and 81 “non-involved civilians.”

The Meir Amit study was based on a review of Arabic news media reports, militant social media and “information originating from Israeli security ­sources.”

For comparison, Mezan provided The Washington Post with its list of the first 152 deaths, which concluded that only 44 were combatants.

Some of the differences arose in the definition of combatant. Where the Israeli researchers list three police officers as members of the Hamas military wing, Izzedine al-Qassam Brigades, the Palestinian researchers do not. The Israelis label “a radical Islamic preacher” as “a terrorist operative affiliated with global jihad.” The Palestinians list him as a civilian.

But there were a dozen other alleged terrorists on the Israeli list that Mezan researchers say were not members of militant factions.