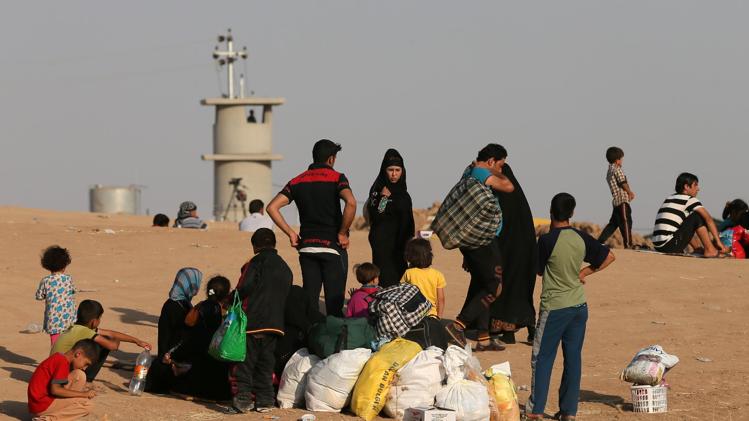 Displaced Shiite Turkmen
Share:
U.S. President Barack Obama is considering airstrikes and humanitarian airdrops to help save thousands of Iraq’s Shiite Turkmen, who officials said Wednesday are facing a potential slaughter at the hands of fighters with the so-called Islamic State.

“These kinds of options are on the table because they do alleviate some of the suffering that is sustained by religious and ethnic minorities that are being persecuted or at least threatened” by ISIS, White House Press Secretary Josh Earnest said during a briefing.

The news followed reports of a new round of U.S. airstrikes targeting ISIS positions near the Kurdish regional capital of Irbil.

ISIS fighters have besieged the town of Amerli, 70 miles north of Baquba, since the Sunni extremists swept into Iraq from Syria since mid-June. The town’s fewer than 20,000 residents are without power.

“Residents are enduring harsh living conditions with severe food and water shortages, and a complete absence of medical services — and there are fears of a possible imminent massacre,” U.N. High Commissioner for Human Rights Navi Pillay said this week.

Their situation echoes the ordeal of Iraq’s ethnic Yazidis, whose plight after they were forced to flee into the mountains to escape ISIS militants triggered U.S. aid drops and the first U.S. airstrikes against ISIS. hat would McCain do against ISIS?

Similar to the chaotic scenes that played out in the Sinjar Mountains, Iraqi military helicopters have been carrying out food drops and picking up Turkmen desperate to get out.

Surrounded on four sides, the 17,400 residents have had to defend themselves with only the help of local police, Masrwr Aswad of Iraq’s Human Rights Commission has said.

ISIS have vowed to push the Shiite Turkmen out, calling them heretics.

Turkmen are descendants of a Turkic-speaking, traditionally nomadic people, who share culture ties with Turkey. There are Sunni and Shiite Turkmen in Iraq, and they account for up to 3% of Iraq’s population.

The United Nations estimates that of the besieged Turkmen population in Amerli, roughly 10,000 are women and children.

Turkmen have been subjected to violence before at the hands of Sunni extremists.

In 2008, a truck bomb exploded in Amerli, killing more than 100 people and leveling homes and businesses. At the time, it was considered one of the single deadliest attacks of the Iraq War.

On Wednesday, American warplanes carried out three airstrikes near Irbil, destroying a number of vehicles and a building, the U.S. military said.

Among the vehicles was a Humvee, the military said.

ISIS seized a large number of military vehicles either abandoned or captured from Syrian and Iraqi forces.