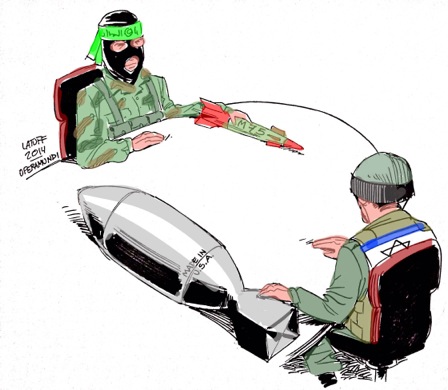 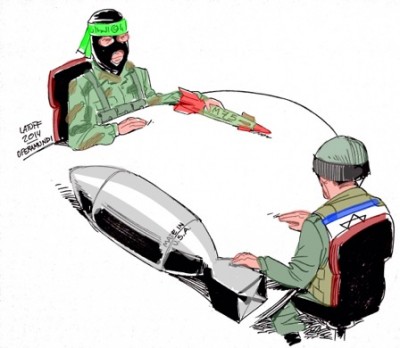 Israel’s campaign to win global support for its fight against Hamas by comparing it to the brutal Islamic State (formerly ISIS) may be resonating at home, but it’s eliciting snickers from many abroad — and could lead to major strategic errors.

There are fundamental differences in terms of the groups’ aims and methods, the primary being that Hamas’s struggle is nationalistic. IS, by contrast, dreams of forcing its version of Islamic law on the entire planet.

“To try to equate Hamas with Al Qaeda or ISIS has potentially quite serious dangers, particularly if those purported similarities begin to enter into an accepted public narrative,” says Charles Lister, a visiting fellow at the Brookings Doha Center in Qatar, who closely tracks the Islamic State and other militant movements in Syria and Iraq. “There’s a danger that more specific assessments of the Israeli-Palestinian conflict would start to be warped … in military, moralistic, and political terms.”

Israel is worried about a rising wave of Islamist militancy – to the west, Ansar al-Sharia in Libya and Al Qaeda in the Maghreb, Hezbollah to the north, Al Qaeda-linked Jabhat al-Nusra and IS to the east, and militants in the Sinai Peninsula to the south. For many in Israel, Hamas – a Palestinian resistance organization that has fired more than 11,000 rockets from Gaza into Israel over the past decade – is part of that larger trend.

“I think most Israelis see a common denominator between the two, no question,” says Yehuda Ben Meir, director of the National Security and Public Opinion project at the Institute for National Security Studies (INSS) in Tel Aviv. “While the majority would be aware of the fact that there are differences, the similarities outdo the differences.”

Israeli officials and analysts equate Hamas and IS in terms of public executions; oppression of women, gays, and religious minorities; and their combination of wooing the local population through social services and intimidating them through violence.

By this assessment, Hamas – which came to power by trouncing its secular Fatah rivals in 2006 elections and then violently ousting them from Gaza the following year – should be treated as ruthlessly and unequivocally as the Islamic State, Israelis argue.

“I know that Hamas for a long time, and quite successfully, tried to make a distinction between [itself] and other radical organizations, but it’s an artificial distinction,” says Shaul Shay, former deputy head of the Israel National Security Council, now with the Institute of Policy & Strategy at the Interdisciplinary Center Herzliya.

“What is the difference to behead somebody in front of the camera than shooting them in front of the camera?” he asks, referring to Hamas’s execution of 18 alleged spies last week, seven of them outside a prominent mosque. “When they threw Fatah members from the top of the buildings in 2007, was it less cruel?”

Hamas and Fatah reconciled this spring and had just ushered in a new Palestinian unity government when three Israeli teenagers were murdered in mid-June, setting off the latest round of violence. Israel blamed Hamas for the kidnappings and rounded up more than 400 Hamas operatives. Hamas in Gaza responded by unleashing rocket fire against Israel, whose Operation Protective Edge entered its 50th day today. More than 2,100 Palestinians have been killed, hundreds of them children, while 64 Israeli soldiers and four civilians have been killed, the latest of them a 4-year-old.

People who study militant groups say that while Hamas does share some similarities with IS, and both pose a threat to Israel, key differences include Hamas’s acceptance of the idea of a nation-state, its more measured use of force, its more sophisticated dispensation of justice, and its willingness to work with Shiite actors such as Hezbollah and Iran, until recently a major financial backer of the movement.

To be sure, Hamas champions violence against Israel. Hamas’s founding charter calls for the destruction of Israel and calls it a religious duty for any Muslim, not just in historic Palestine but across the Arab and Muslim worlds, to participate in jihad against Zionism until Palestine is liberated.

For example, IS’s first step when taking over new territory is to establish an Islamic sharia court, which metes out justice according to its interpretation of Islamic law, says Dr. Ranstorp. In contrast, he adds, Hamas has “a much more sophisticated way of doing it through clan arbitration; there is some element of a judicial process that is not as severe as sharia courts in the Islamic State.”

While others guffaw at the idea that Hamas would ever seek a caliphate, Ranstorp is more cautious about limiting Hamas’s aspirations to the territory bounded by Lebanon, Egypt, and the Jordanian river. Hamas founder Ahmed Yassin, whom Israel assassinated in 2004, once told him that an Islamic revolution in adjacent lands – meaning Lebanon and Egypt – would be required before Hamas could fulfill its goals.

And Yusuf Qaradawi, the spiritual leader of the Muslim Brotherhood, of which Hamas is an offshoot, said earlier this summer that the Brotherhood seeks a transnational Muslim government but on different terms than the Islamic State.

“We look forward to the coming, as soon as possible, of the caliphate,” said Mr. Qaradawi, though he denounced IS – a group “known for its atrocities” – as unqualified to establish such a form of government. “But the declaration issued by the Islamic State is void under sharia and has dangerous consequences for the Sunnis in Iraq and for the revolt in Syria.”