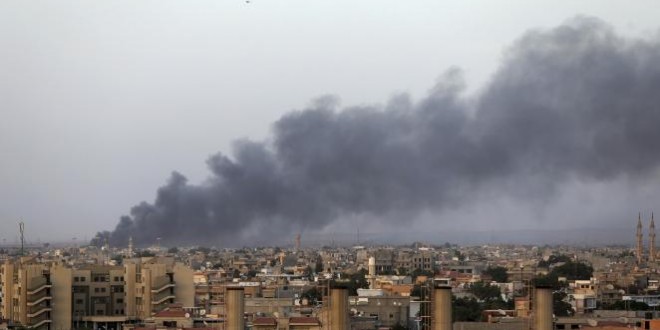 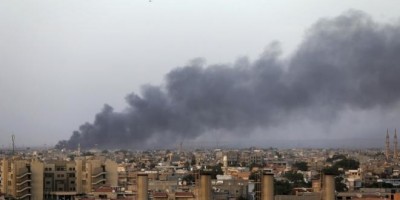 Fire destroyed the terminal at Tripoli’s main airport on Sunday, one day after it was seized by militia fighters from the Libyan city of Misrata, witnesses said.

Unidentified war planes also attacked targets in the capital, residents said, the latest stage of the worst fighting in Libya since the overthrow of Muammar Gaddafi in 2011.

Tripoli residents heard jets followed by explosions at dawn but more details were not immediately available.

It was unclear who had burned the terminal and supporters of the rival factions took to social media to accused each other.

The main building was completely torched, witnesses said. All planes in front of it were damaged, as well as many houses and office buildings on airport road.

A militia called Operation Dawn, consisting mainly of fighters from Misrata, said on Saturday that it had captured the airport from a rival faction from Zintan in western Libya.

However, it was deserted on Sunday with Misrata forces deployed on the airport road and no sign of Zintani fighters.

In the campaign to overthrow Gaddafi, fighters from Zintan and Misrata were comrades-in-arms. But they later fell out and this year have turned parts of Tripoli into a battlefield, with the weak government unable to control armed factions.

The central government lacks a functioning national army and relies on militias for public security. While these forces receive state salaries and wear uniforms, they report in practice to their own commanders and towns.

In a challenge to a parliament elected on June 25, an Operation Dawn spokesman called for the old General National Congress, set up after the fall of Gaddafi, to be reinstated.

The Misrata forces have rejected the new House of Representatives, where liberals and lawmakers campaigning for a federalist system have made a strong showing.

The parliament has declared Operation Dawn as well as militant Islamists like the Ansar al-Sharia as “terrorist groups”.

“It is not clear if the meeting will be consultative or we grant legitimacy to the rebels,” he said.

The House of Representatives, which has fled to Tobruk in the east with senior officials to escape the fighting, had asked Haftar to fight the Operation Dawn forces.

Haftar launched a campaign against Islamists in the eastern city of Benghazi in May and threw his weight behind the Zintan fighters.

Misrata forces have blamed the air strikes on Egypt and the United Arab Emirates, two countries which have cracked down on Islamists. Libya’s government says it does not know who is behind the attacks. Egypt denies conducting any air strikes or other military operations in Libya.