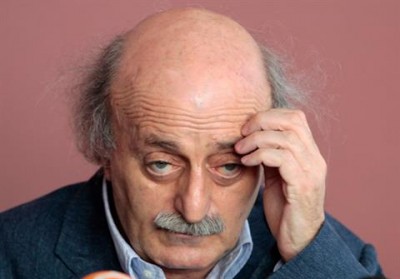 During a vist to Kayfoon in the Aley district , Progressive Socialist Party (PSP) leader Walid Jumblatt said that he is seeking a settlement with Speaker Nabih Berri and Hezbollah chief Hassan Nasrallah to end the stalemate on the presidential election since Lebanese president is not only the concern of the country’s Christians.

But Elie Mahfouz, a member of the March 14 alliance and head of the Change Movement slammed Jumblatt and said:

“Is the Jumblatt , Berri, Hezbollah triangle now trying to tell the Christians who will the president be ?

“Jumblatt spoke the truth when he said that the president is not only for Christians, but he did not go on [to say] that the prime minister and the speaker of parliament are not only for Sunnis and Shiites,” Geagea said in a statement Monday.

“I know that he does not usually fail to respect [the constitution]… but I am surprised that this has not surfaced in connection with the presidential elections.”

She went on to question why the Lebanese president should not represent his own sect as well as the rest of Lebanon, and asked how Jumblatt would feel if members of other sects negotiated over which Druze MPs should have seats in the parliament.

“What is [wrong with] the president of all the Lebanese people representing [a sect] at the same time and having a popular presence? Does that make him less representative of all Lebanese?” She wondered

“Would our friend Walid Jumblatt accept LF leader Samir Geagea negotiating with Speaker Nabih Berri on the Druze seats in parliament?” She asked.

Commenting on Jumblatt’s defense of Hezbollah and his rejection of comparing the Iranian backed militant group to ISIS Mahfouuz told Jumblatt:

“You haven’t learned your lesson yet” .

“With all my respect to Walid Jumblatt I disagree with him and I hereby tell him that the Islamic State of Iraq and Syria (ISIS) , Hezbollah and the Syrian regime are many faces of the same coin”.

He added it seems Walid Jumblatt has forgotten 2008 when Hezbollah ‘s elite fighters headed to Mount Lebanon and tried to invade his Mukhtara castle.

He added: ” Jumblatt may have forgotten but his people will never forget what happened.” This is a possible reference to Hezbollah’s occupation of West Beirut and its failed attempt to ccuppy Mt Lebanon in May 2008.Jumblatt , who was at his Beirut residence at the time was encircled by Hezbollah and Amal Movement gunmen but the Druze community of Mt Lebanon fought Hezbollah with whatever basis arms they could find . Some reports indicated at the time that Hezbollah’s casualties in Mt Lebanon surpassed those of the 2006 war with Israel. Sheikh Naim Qassem’s son was reportedly killed in the MT Lebanon clashes. Qassem is Nasrallah’s deputy .

Justice Minister Ashraf Rifi , a key member of the March 14 alliance said in an interview on LBC TV on Thursday evening. that Hezbollah and ISIS are similar, pointing out that “Hezbollah’s Iranian project in Lebanon doesn’t differ much from ISIL plans.”

“Hezbollah [tries to] eliminate [its rivals.] Its project is Iranian and it wants hegemony over Lebanon. It follows that any group which tries to eliminate its rivals is like ISIS. ”

Rifi was the general director of the Lebanese Internal Security Forces from 2005 to 2013. He has been serving as minister of justice since 15 February 2014.