Some residents of Tabqa and IS militants celebrated the news of the base’s capture
Share: 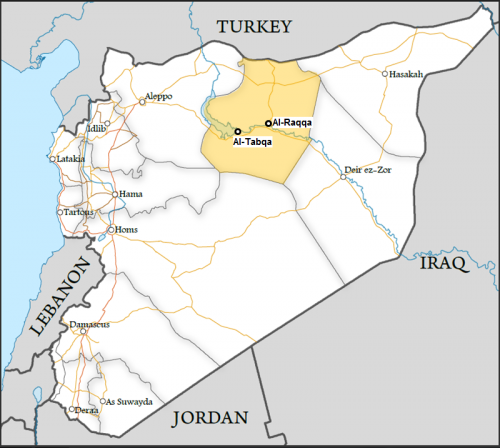 Fighters from Islamic State (IS) have taken control of a key Syrian government airbase, activists say.

The Tabqa airbase was the last remaining stronghold of Bashar al-Assad’s government in Raqqa province..

State TV confirmed that government forces had “evacuated” the airbase. Days of fighting there have reportedly killed hundreds on both sides.

More than 191,000 people have now been killed in the three-year-old Syrian conflict up to April, the UN says.

IS, formerly known as Isis, has expanded its reach into large parts of eastern Syria and northern Iraq in recent months.

The US has launched limited airstrikes against the group in Iraq but has not targeted them in Syria.

The Syrian Observatory for Human Rights, a UK-based activist group with opposition ties, said clashes around the airbase were ongoing but added that the base was under IS control.

Hundreds of soldiers and IS fighters had died in the past few days’ fighting around the base, the Observatory said.

Syrian state television confirmed that government troops had lost control of the base.

“After heavy fighting by the forces defending the Tabqa airbase, our forces implemented a regrouping operation after the evacuation of the airbase,” it said.

Government forces were conducting airstrikes on the base after the troops evacuated, it reported.