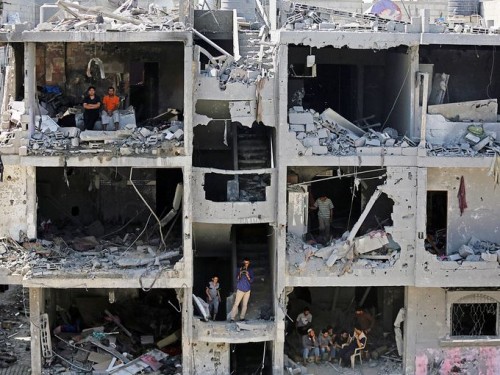 Egypt on Saturday called for an open-ended cease-fire in the Gaza Strip, urging the Palestinians and Israel to return to indirect talks.

A temporary cease-fire collapsed earlier this week, bringing the Egyptian-brokered talks to a halt. More than 2,090 Palestinians, including close to 500 children, have been killed since the Gaza war began on July 8.

Meanwhile, the Islamic militant group Hamas — the war’s main Palestinian participant — has signed a pledge to back any Palestinian bid to join the International Criminal Court. Palestinian acceptance of the court’s jurisdiction could expose Israel — as well as Hamas — to war crimes investigations.

Hamas’ written consent could further increase domestic pressure on Palestinian President Mahmoud Abbas to turn to the court. Such pressure has been mounting since the start of the Israel-Hamas war on July 8, in which more than 2,000 Palestinians have been killed in Gaza.

A hesitant Abbas has debated for months whether to join the international court, a step that could transform his relations with Israel from tense to openly hostile, strain his ties with the United States and deprive his government of badly needed Western financial support.

Last month, Abbas said he would not make a move without the written consent of all Palestinian factions. He obtained such support from all groups represented in the Palestine Liberation Organization, while Hamas, not a PLO member, said it would study the idea.

With Hamas now pledging its support in writing, Abbas likely will face even stronger pressure at home to turn to the court, though it’s still not clear if and when he might do so.

In a new twist, the Iranian-backed Islamic Jihad group, also not a PLO member and one of the factions fighting in Gaza, said Saturday it would not approve going to the international court.

The office of Israeli Prime Minister Benjamin Netanyahu declined comment. Israel opposes involving the court, arguing that Israel and the Palestinians should deal with any issues directly.

Abbas signaled that he hasn’t made a decision yet after a meeting in Cairo with Egyptian President Abdel-Fattah el-Sissi, saying that “we are about to finalize this issue.” The two talked about ways of resuming Israel-Hamas truce talks that collapsed earlier this week.

In the past seven weeks, more than 2,090 Palestinians have been killed, including close to 500 children, and about 100,000 Gazans have been left homeless, according to United Nations figures and Palestinian officials. Israel lost 64 soldiers and four civilians, including a 4-year-old boy killed by a mortar shell Friday.

During the war, Gaza militants have fired more than 3,800 rockets and mortar shells at Israel, while Israel launched about 5,000 airstrikes at Gaza, the military said. Israel has said it has targeted sites linked to militants, including rocket launchers and weapons. U.N. and Palestinian officials say three-fourths of those killed in Gaza have been civilians.

On Saturday, an airstrike on a house in central Gaza killed two women, two children and a man, according to medics at the Red Crescent. Six strikes also hit a house in the Zeitoun neighborhood of Gaza, causing severe damage and wounding at least five people, Gaza police said.

Hamas’ decision to back any bid by Abbas to turn to the international court came after meetings Thursday and Friday in Qatar between Abbas and the top Hamas leader in exile, Khaled Mashaal.

If Abbas were to turn to the court, Hamas could be investigated for indiscriminate rocket fire at Israel since 2000. Israel could come under scrutiny for its actions in the current Gaza war as well as decades of settlement building on war-won lands the Palestinians seek for a state.

Hamas has been branded a terror organization by Israel and the West. Israel has accused Hamas of using Gaza civilians as human shields by firing rockets from residential areas.

After the last major round of Israel-Hamas fighting more than five years ago, a U.N. fact-finding team said both Israel and Hamas violated the rules of war by targeting civilians — Hamas by firing rockets at Israel.

However, Izzat Rishq, a senior Hamas official, said Saturday that Hamas was not concerned about becoming a target of a war crimes investigation and urged Abbas to act “as soon as possible.”

“We are under occupation, under daily attack and our fighters are defending their people,” he said in a phone interview from Qatar. “These rockets are meant to stop Israeli attacks and it is well known that Israel initiated this war and previous wars.”

Moussa Abu Marzouk, a senior Hamas leader who participated in the meetings, wrote on his Facebook page early Saturday that “Hamas has signed the paper” of support Abbas had requested. Abu Marzouk’s post was also reported on Hamas news websites.

A senior Palestinian official has said Abbas likely would wait for the findings of a U.N.-appointed commission of inquiry into possible Gaza war crimes — due by March — before turning to the court. The official spoke on condition of anonymity because he was not authorized to discuss internal deliberations with reporters.

A former International Criminal Court prosecutor, Luis Moreno Ocampo, told The Associated Press earlier this week that he believes drawing the court into the Israeli-Palestinian conflict might be a positive step.

“I think the ICC could contribute to a solution” of the Israeli-Palestinian conflict, he said.

He noted that the court, established in 2002, would only get involved if it determined that the two sides are not conducting their own credible investigations of alleged war crimes.

Turning to the International Criminal Court became an option for Abbas in 2012, after the U.N. General Assembly recognized “Palestine” in the West Bank, Gaza and east Jerusalem, lands captured by Israel in 1967, as a non-member observer state. The upgrade to a state opened the door to requesting the court’s jurisdiction in Palestine.