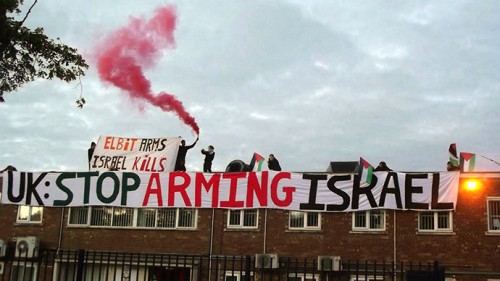 Against a backdrop of widespread bloodshed and devastation in Gaza, a mounting body of evidence indicates military equipment used by Israel during Operation Protective Edge was made in the UK.

Britain’s arms trade relations with Israel are extremely lucrative. Since 2010, British authorities have presided over the sale of £42 million worth of military produce to the Middle Eastern state. On an annual basis, the British government grants up to £15 million worth of licenses to UK defense firms for the export of military equipment to Israel. These figures stem from in-depth research conducted by the Campaign Against the Arms Trade (CAAT), a London-based NGO dedicated to tackling the global arms industry’s impact on human rights.

Approximately 44 defense companies spanning Scotland, England, Wales and Northern Ireland broker UK arms exports to Israel, according to the CAAT. Four such firms are Raytheon, Schleifring Systems, Selex Galileo, and UAV Engines. Each of these defense factories epitomize an acutely profitable yet contentious set of military trade relations between Britain and Israel. And amidst nationwide concern over the humanitarian crisis in Gaza, there is strong reason to surmise drone engines, bomb components and other parts produced by these firms were deployed by the IDF during its recent military attacks on the region.

Raytheon
Israeli bombs responsible for bloodshed in Gaza are comprised of laser-guidance systems manufactured in Scotland, the Daily Record revealed last week. This laser-guidance technology is produced in a factory in Fife, the parent company of which is a US-headquartered arms manufacturer called Raytheon.

Raytheon have reportedly claimed in the past they “take a dumb bomb and make it into a smart bomb.” But this “smart” technology harbors the capacity to unleash profound destruction. One of the firm’s laser-guided Paveway II bombs was photographed in late July as it descended onto a Gazan neighborhood, reaping devastation upon its impact.

The airstrike was part of Israel’s military assault on Gaza, which began on July 8 and has culminated in the death of almost 2,000 Palestinians. Israel, by contrast, has lost 64 soldiers during the conflict and three civilians. Paveway II bombs have been extensively deployed since the IDF’s Gaza offensive began, reducing hospitals, homes, schools and even UN-refugees to dust and rubble. Palestinian officials recently reported that over 50,000 of these deadly devices have fallen on the besieged Gaza Strip since July 8.

Raytheon’s manufacture of the Paveway II bomb is a niche sector, with only one other arms company in the world producing this equipment. The firm is also one of Israel’s biggest suppliers of military equipment.

Asked whether Scotland-made technology was deployed in bombs recently dropped over Gaza, a spokesperson for the Scottish branch of Raytheon said: “Our Glenrothes facility does component work for a wide range of our government and commercial solutions.”

The Scottish wing of Italian arms firm, Selex Galieo, has recently been marketing hi-tech Gabbiano technology installed in Israel’s Hermes drones. These unmanned aerial vehicles (UAVs) have been regularly deployed to orchestrate attacks on Gaza, and are described by the Israeli Air Force as the foundation of Israel’s targeting and surveillance missions. IDF commanders have reportedly praised Hermes UAVs for delivering increased operative value in Israel’s recent military missions in Gaza.

Selex, a subsidiary of Rome-based arms giant Finmeccanica, maintains it only sells products to foreign states that comply with UK government export regulations. Under these regulations, the UK cannot issue arms export licenses if related military wares are being deployed by states for internal oppression. But the Gabbiano technology Selex produces for Israel’s 450 Hermes drones is classed as an Italian arms product, and so is bound by Italy’s export legislation.