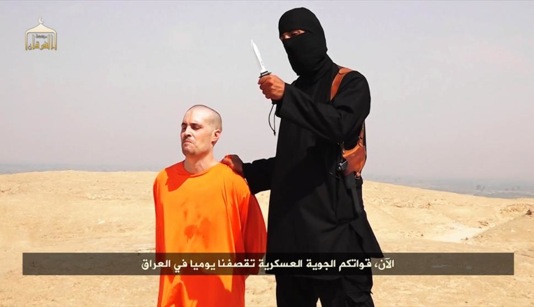 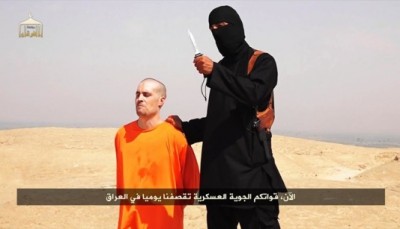 British Muslim leaders urged people to contact police if they knew the identity of the man with an English accent who appeared in a video showing the beheading of an American journalist.

The Muslim Council of Britain, the largest Muslim umbrella group in the country, condemned the “abhorrent murder” of James Foley in Syria and called for united action by Muslims to stop the “poison of extremism” infiltrating their communities.

Prime Minister David Cameron said on Wednesday it looked increasingly likely that the man in the Islamic State video was British, one of hundreds who have travelled to Syria to fight.

“We condemn unreservedly (the Islamic States’) psychopathic violence, whether it is on minorities, on civilians, or on fellow Muslims,” the council said in a statement.

“We are horrified at the abhorrent murder of James Foley, a reporter who initially went to the region to expose the human rights abuses of the Syrian regime.”

Iqbal Sacranie, an adviser to the council, told London’s Evening Standard newspaper that anyone who recognised the man had a duty to contact police.

A European security official said that judging from his accent – which sounded like it came from London or near London – the man had obviously lived in Britain for a long time. Authorities were comparing his voice to those on record to try to establish his identity, the official said.

The Guardian newspaper said a former hostage had identified the man in the video as the leader of three Britons who had guarded foreign nationals in the city of Raqqa – its stronghold in eastern Syria.

The BBC also reported the presence of three British jihadists who were tasked by the Islamic State to guard foreign prisoners.

“It seems that these three have apparently got nicknames named after the Beatles: John, Paul and Ringo and there are reports that they have been pretty brutal towards their hostages,” the BBC said.

Britain, which has about 2.7 million Muslims in its 63 million population, had previously warned about the increasing numbers of its nationals who had travelled to Syria and Iraq to fight.

Four young British Islamists – two of whom had been to al Qaeda training camps inPakistan – killed 52 people in suicide bomb attacks on London in July 2005, and Britons have appeared in graphic Islamist videos before.

Richard Barrett, a former British security official and former coordinator of the United Nations al-Qaeda Taliban Monitoring Team, said he expected the authorities to identify the man pretty quickly, and that arresting him would be the long-term objective.

“The most important thing is to demonstrate that there’s a legal system, that you cannot do these things even in the middle of the desert, just because you are in something called Islamic State or the caliphate,” he said.

British police have urged Muslim women to dissuade young people in their communities from turning towards the Islamic State, in one of many tactics used by European governments worried about the future security risk posed by youths radicalised by war.

Ghaffar Hussain, managing director of counter-extremism think-tank Quilliam, said it was now almost inevitable that people who had fought in Syria would come back to try to launch attacks in Europe.

“It is disturbing that people born and raised in Britain and who have gone to the same schools as us could have been essentially indoctrinated to the extent where they can justify raping women and chopping heads off,” he said.

The success of the Islamic State is also likely to draw more people into the group, which has proclaimed a caliphate in the parts of Iraq and Syria it controls.

“We know … that the threat which is being taken most seriously is the risk of the return of those who have been radicalised, to the point of being jihadists,” Menzies Campbell, a senior Liberal Democrat lawmaker and member of parliament’s Intelligence and Security Committee, told Reuters.

“If anyone’s in doubt as to the brutality of those who have been radicalised in that way, then this incident should certainly remove that doubt.”

More British Muslims fight for IS than Britain
Britain’s Ministry of Defense confirmed to USA TODAY that there are approximately 600 British Muslim servicemembers in its armed forces of almost 200,000 people. Official government estimates put the number of British Islamic State fighters operating in Syria and Iraq at 500 to 800. The Foreign Office cautioned Thursday that it is difficult to provide precise numbers.

Khalid Mahmood, a member of Parliament from an area with a high proportion of Muslim residents, said government estimates of the number of British IS fighters currently in the Mideast is far too conservative. He told Newsweek magazine this week that at least 1,500 extremists are likely to have been recruited to fight in Iraq and Syria over the last three years.

“There are an unacceptable number of Britons fighting for jihadist forces,” he said.