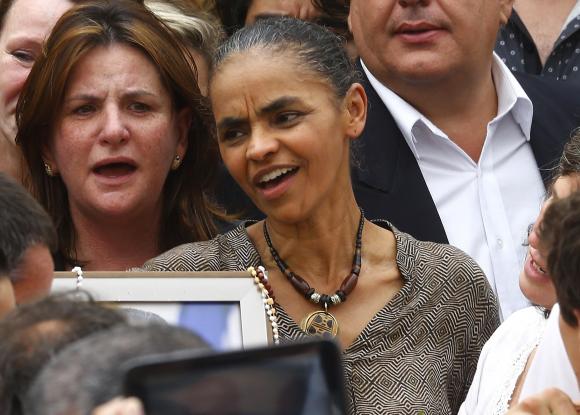 Silva, until now a vice-presidential candidate for the Brazilian Socialist Party, accepted its nomination to top the ticket after candidate Eduardo Campos, a former governor and rising political star, was killed in a plane crash last week.

Viewed as an outsider with no links to traditional elites, Silva is a former environment minister whose ironclad environmental and religious beliefs prompt critics to call her inflexible but supporters to praise her as Brazil’s most principled politician.

Silva, a rubber tapper in her youth who was illiterate until adolescence, appeals mostly to young voters disgusted with Brazil’s political establishment.

But she is also embraced by Brazil’s large evangelical Christian community and has proven, in a 2010 bid for the presidency with the Green Party, to be an attractive candidate for independent voters seeking an alternative to the Workers’ Party and its main opposition, the business-friendly Brazilian Social Democracy Party (PSDB).

An opinion poll on Monday showed Silva, who has vowed to find common ground between her activist ideals and investor-friendly economic policies, tied in second place with the PSDB’s Aecio Neves for the Oct. 5 election.

The vote is expected to go to a runoff, at which point Silva or Neves, whomever finishes ahead, enjoys growing odds of defeating President Dilma Rousseff, who has overseen four years of lackluster growth in Brazil’s previously booming economy.

On Tuesday, a PSDB source told Reuters the party, to ensure Rousseff is unseated, would back Silva in a runoff if Neves failed to make it.

Silva, a 56-year-old pioneer of Brazil’s environmental movement, entered politics to fight for Amazon conservation. Once a member of the Workers’ Party, which embraced environmental causes before assuming a developmentalist tack once it came into power, Silva served as environment minister during the administration of former president Luiz Inacio Lula da Silva, Rousseff’s predecessor.

As minister Silva clashed with other officials, including Rousseff, over the licensing of hydroelectric dams in the Amazon, ultimately leading her to resign. As a Workers’ Party opponent in 2010, she reaped a stronger-than-expected 19 percent of the vote.

For this candidacy to succeed, Silva must broaden her base and draw funding from sectors of Brazilian society, particularly the business segment, long wary of her views.

To overcome suspicions by Brazil’s powerful agribusiness sector, which accounts for one quarter of Brazil’s economy and 44 percent of its exports, the PSB picked as her running mate a farm-friendly congressman from Rio Grande do Sul, an agribusiness stronghold. The congressman, Beto Albuquerque, a decade ago pushed through Congress, despite Silva’s objections, legislation legalizing the use of genetically modified soybeans.

If elected, Silva’s economic advisers say her policies would be as business-friendly as those advocated by Neves.

Among other pledges, Silva would ensure autonomy of the central bank and streamline a government budget long criticized as wasteful by investors and Brazil’s business community
Reuters