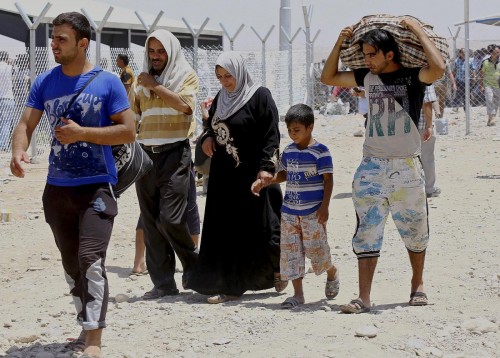 The U.N. refugee agency is due to begin a massive four-day airlift of aid Wednesday into northern Iraq, where fighting between Islamist extremists and Kurdish forces has created a humanitarian crisis.

It’s one of the largest aid pushes the agency has ever undertaken. And it’s much needed. Some half a million people have been forced from their homes as ISIS militants have advanced.

The U.N. refugee agency, UNHCR, said the desperately needed aid would be flown by Boeing 747s from Jordan into Irbil, the Kurdish regional capital.

The planned four-day airlift will be followed by cargo deliveries made by road and sea over the next 10 days.

The initial shipments will include thousands of tents, plastic sheets, kitchen sets and jerrycans, destined for families who fled with little more than the clothes on their back.

Many have been sleeping rough where they can, finding shelter in schools, mosques or unfinished buildings, the UNHCR said. The agency is working to set up a dozen or more tent cities in Dohuk and Irbil governorates where some 140,000 people can be housed.

“Many are still coming to grips with the tragedy they’ve been through in recent weeks — fleeing homes with nothing, and many trying to cope with the loss of loved ones. Emergency support is an urgent need that we are trying to meet.”

The ISIS militants, who are Sunni Muslim extremists, have carried out brutal attacks on towns and villages as they’ve advanced across Iraq, targeting Iraq’s Christians, minority sects such as the Yazidis, centered in the northern Sinjar area, and Shia Muslims.

The UNHCR estimates that 1.2 million Iraqis have been forced from their homes so far this year, including more than half a million in the western Anbar province and a similar number in northern Iraq.

As the massive aid operation swings into gear, fierce fighting continues between the militants and Kurdish forces for control of northern Iraq.

On Monday, U.S. airstrikes helped Kurdish and Iraqi forces take control of the key Mosul Dam, fighting back the militants who had seized it.

The stakes were huge for the millions of Iraqis who live downstream from the dam, the largest in the country, amid fears that if it were breached floods would have threatened lives in Mosul and downriver in Baghdad..

Now that the dam is cleared of ISIS militants, Iraqi forces are moving to grow their area of control, the Pentagon said.

The ISIS militants have carried out numerous executions, including beheadings, as part of its effort to establish an Islamic caliphate that stretches from Syria into Iraq. In many cases, ISIS — which refers to itself as the Islamic State — has videotaped the executions and posted them online.

A video released Tuesday on YouTube shows the beheading of U.S. journalist James Foley and threatens the life of another American if U.S. President Barack Obama does not end military operations in Iraq.

Foley disappeared on November 22, 2012, in northwest Syria, near the border with Turkey. He was reportedly forced into a vehicle by gunmen; he was not heard from again. At the time of his disappearance, he was working for the U.S.-based online news outlet GlobalPost.