SCC decided to go on strike and sue Lebanon government 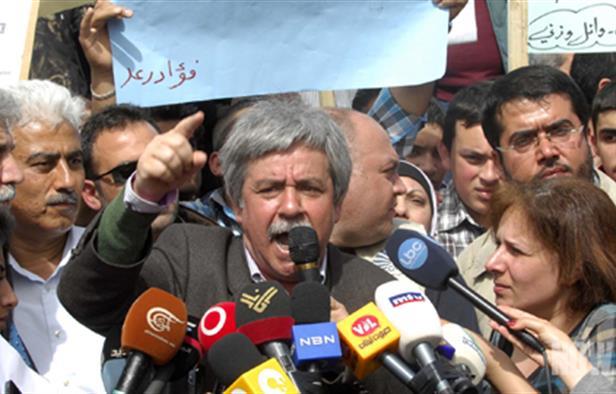 SCC chief Hanna Gharib (C)
Share:
The Syndicate Coordination Committee decided on Tuesday to go strike on Thursday, in response to the Minister of Education’s decision to issue certificates of attendance to students who took the official exams, and threatened to file a lawsuit against the Lebanese Government to prevent the minister from issuing the certificates.

“The education minister’s statements and his accusations are nothing but a prelude to privatizing the official exams… our battle with politicians will continue.”

Saab announced Saturday that certificates of attendance will be issued to middle and high school students who took the official exam instead of the officially graded exam results, after negotiations failed to end a union boycott of exam grading.

The boycott is part of ongoing labor action aimed at forcing the approval of the ranks and salaries system, a move which was described as blackmail by the government .

Bou Saab added that Lebanon’s Syndicate Coordination Committee, which has led calls for approval of the ranks and salaries system, is hurting itself through political wrangling.

“It is politics that has won the greatest victory… The SCC is the greatest loser by choice.” Bou Saab was quoted as saying.

The ranks and salaries scale was amended by a parliamentary sub-committee in early May 2014. The committee was formed to reinvestigate the wage increase, after parliament failed to reach an agreement on sources of funding.

The committee went on to recommend that all branches of the Lebanese University hold entrance exams, given that the certificates do not provide an indication of the students’ abilities.

Bou Saab assured during the meeting that the decision to issue certificates of attendance “has gone into effect and will not be withdrawn.”

“I am only taking into consideration the interest of students,” Boo Saab stressed

But the SCC stressed on Tuesday that it will exert all efforts to “salvage official exams and secure rights.”