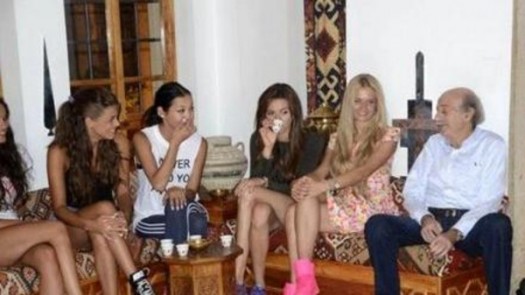 Twitter users poked fun at prominent Lebanese politician Walid Jumblatt for hosting contestants of a beauty pageant, at a time where Lebanon and the region face threats from extremist Islamist groups.

Jumblatt, considered to be a very influential figure in Lebanon’s Druze religious community, held a tea party at his palace for the Top Model 2014 contestants, Lebanon’s Annahar Newspaper reported Sunday.

The visit, during which contestants drank coffee with Jumblatt and played with his dog, was planned upon the request of the contest organizers, the newspaper said.
However, the half-an-hour long visit laid Jumblatt in hot water after social media users reacted to pictures of the visit.
“Who says this isn’t a strong message to Baghdadi?” one Twitter user said.

A picture from Jumblatt’s soft meeting with the candidates was also circulated on Twitter, accompanied by a mocking message in Arabic saying: “Jumblatt discusses ISIS threat.”

Jumblatt had said earlier that he is alarmed by the rise of the Islamic State of Iraq and Syria and the threat it can pose to Christians and religious minorities in the region.

He also said in statements the threat posed by ISIS to the region should also force Lebanese Christian leaders to agree on a new head of state, a position which had been vacant for the past months.