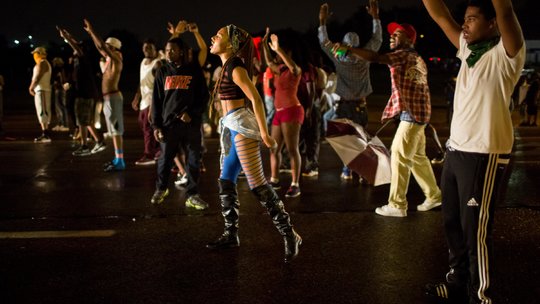 Protesters angered over the police shooting of Michael Brown, 18, squared off with law enforcement in the streets of Ferguson, Mo., again, looting some stores. Video Credit By Brent McDonald on Publish Date August 16, 2014. Image CreditWhitney Curtis for The New York Times
Share:

FERGUSON, Mo. — Gov. Jay Nixon of Missouri on Saturday imposed a midnight to 5 a.m. curfew in this small city, declaring a state of emergency as violence flared anew after a week of street protests over the killing of an unarmed black teenager by a white police officer.

“This is not to silence the people of Ferguson, but to address those who are drowning out the voice of the people with their actions,” Mr. Nixon, a Democrat, told reporters and residents at a Ferguson church. “We will not allow a handful of looters to endanger the rest of this community. If we’re going to achieve justice, we must first have and maintain peace.”

Mr. Nixon added: “This is a test. The eyes of the world are watching.”

As the curfew took effect, heavy rains began to fall and the streets, which had been filled with people less than an hour before, were largely deserted.

Capt. Ronald S. Johnson, the state Highway Patrol commander whose officers have overseen public security in Ferguson since Thursday, did not say how long the curfew would be in force or whether violators would be arrested.

The announcement prompted cries of protest and anguish from some members of the public who attended the news conference, with many of them arguing that a curfew would lead only to new and fierce confrontations. Some people begged to be able to go into the streets themselves to try to calm any violence. But Captain Johnson said the curfew would be put in place and enforced.

Clusters of protesters remained standing in a parking lot after midnight and officers slowly walked down West Florissant Avenue, a hub for demonstrators in recent days, in their direction. Other officers, in riot gear, stood in a line in front of businesses that had previously been looted. As the curfew took effect, police radio traffic crackled with reports of demonstrators in other locations.

Mr. Nixon announced his decision at the Greater St. Mark Family Church, near the site of the unrest. The news conference quickly became frenzied, with the governor and Captain Johnson confronting a volley of aggressive questions, most of them from residents. It came a week after the death of Michael Brown, 18, who was shot by Officer Darren Wilson. The police said that Mr. Brown had been stopped for walking down the middle of the street and that a scuffle had ensued, ending in gunfire; other eyewitnesses have disputed that account.

At times, Mr. Nixon and Captain Johnson both appeared chagrined by the spectacle, the governor curtly telling one prospective questioner, “I’ll let you yell at me next.”

Mr. Nixon described the looting and violence as the work of an isolated few, but emphasized that a curfew was necessary to restore order in a community where residents have complained that basic services, like summoning an ambulance through a 911 call, have been disrupted by the protests.

“Small groups took to the streets with the intent of committing crimes and endangering citizens,” Mr. Nixon said after he praised “the courage and resolve of peaceful protesters.”

The curfew came under quick attack from some people in the church and from protesters whom Captain Johnson credited with assisting the police in maintaining order.

“Right now, I want to make sure that my people don’t get hurt tonight,” said Malik Z. Shabazz of Black Lawyers for Justice. He said his group would bring a lawsuit challenging the treatment of Ferguson residents by the police in the initial days of turmoil.

Some residents shouted at the governor, including one man who said, “We will not get sleep until we get justice for Michael Brown!”

Another man shouted, “Sleep is not an option, Governor Nixon!”

Steven W. Hawkins, the executive director of Amnesty International USA, said in a statement: “It’s hard to build trust if the governor doesn’t meet with community members and restricts their movements with a curfew.”

But the announcement was greeted with relief from some elected officials, who have struggled to hold off the faction of protesters who have engaged in looting.

“I don’t know what the answer is, but there has to be some type of response because it’s only getting worse out there,” Patricia Bynes, a black Democratic committeewoman for Ferguson Township, said on Saturday. “People are fed up with police brutality and police harassment. There is still so much racism and discrimination in this region, ingrained in the business world and the communities. This is what happens when institutional racism continues.”

The shooting is being investigated by the Justice Department. Agents of the Federal Bureau of Investigation have been flooding into Ferguson, seeking witnesses. Locally, the case is being handled by the St. Louis County prosecutor, Robert McCulloch, but there have been calls to have the case shifted to a special prosecutor, in part because of criticism that Mr. McCulloch has not been rigorous in prosecuting law enforcement officers in high-profile cases.

Since last Sunday, Ferguson has seesawed between extremes: order and unrest, protests and looting.

It has seen peaceful demonstrations by day and often ugly clashes at night between highly militarized police officers and angry protesters calling for justice for Mr. Brown. On Thursday, President Obama urged an end to the violence and the governor ordered the state Highway Patrol to take over security from local law enforcement.

Residents have taken to the streets each day, holding placards condemning what they say is a long history of harassment and abuse of African-Americans at the hands of the largely white Ferguson police force. Groups of people have silently confronted police officers, facing them with their hands in the air, as witnesses said Mr. Brown did before he was shot.

And late at night, a small number of unruly people in the crowd have turned violent, smashing shop windows and stealing hair supplies and liquor. For several days, television networks have replayed clips of people looting, burning down a convenience store and throwing glass bottles and gasoline bombs at heavily armed police officers, drawing comparisons to scenes from a war-ravaged city.

Earlier, Chief Jon Belmar of the St. Louis County Police had dismissed the idea of a curfew, saying that such an action would not hinder people determined to cause violence, while negatively affecting residents engaging in innocent activity, like walking home from the bus stop after a late shift of work.

But Mr. Nixon, increasingly desperate to bring the situation in Ferguson under control, said he embraced the tactic reluctantly.

Earlier Saturday, in a new sign of discord among the authorities over the handling of the investigation into Mr. Brown’s death, the Justice Department said that it had opposed the release of a video that the Ferguson Police Department said showed the teenager apparently involved in a robbery at a convenience store.

The Justice Department asked the Ferguson Police Department not to release the video because of concerns that “it would roil the community further,” a United States law enforcement official said on Saturday. The Ferguson department released the video on Friday and the Justice official said it “occurred over the objection of federal authorities.” The official said a copy of the video had been in possession of federal investigators, as well, “and there were never any plans by the federal investigators to release that copy.”

The dispute showed further divisions among the authorities in the handling of the case. The surveillance video appeared to show Mr. Brown stealing a box of cigarillos. Shortly after the release of the video, Captain Johnson expressed his displeasure, saying he had not been told that the police planned to release it.

Mr. Brown’s family and many protesters accused the police of trying to harm the teenager’s reputation and to divert attention from the officer who killed him. The police have said that Officer Wilson was not aware of what had happened at the convenience store when he encountered Mr. Brown. The police identified the officer for the first time on Friday; he has been put on administrative leave and his whereabouts were unknown. Neighbors on his block in Crestwood, a suburb of St. Louis, said that he left his home several days ago and has not been seen since. On Saturday, the house appeared deserted, the blinds in the windows closed tightly.

On Friday night, hundreds of protesters returned to the streets in anger over the shooting and the handling of the investigation. The confrontation between the police and demonstrators, the first serious one since the Highway Patrol assumed responsibility for security operations, ended at about 4 a.m. when the authorities, prompted by the gradual dispersal of demonstrators, pulled back to their nearby command post. The Associated Press reported that one law enforcement official had been injured overnight.

Ferguson continued to draw African-American leaders, who appeared at protests and held prayer vigils. On Saturday, dozens of clergy members, including the Rev. Jesse L. Jackson and hundreds of people, including residents from Ferguson, greater St. Louis and beyond, gathered on Canfield Drive, the street where Mr. Brown was killed, in front of two makeshift memorials decorated with candles, stuffed animals and flowers.