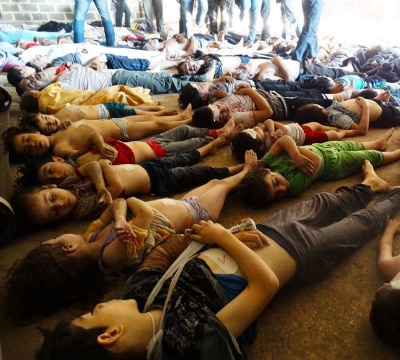 The GhoUta area became famous after 1300 Syrians were killed in a chemical attack
Share:

Syrian government forces backed by Lebanon’s Hezbollah took control of a town just outside Damascus from Islamist fighters on Thursday, a blow to the rebels who had held it for more than a year.

Syrian state television broadcast showed government soldiers in the streets of Mleiha, which lies on the edge of the eastern Ghouta region near Damascus airport and had been surrounded by President Bashar al-Assad’s forces. Buildings were damaged or reduced to rubble, and tanks patrolled the streets.

Mleiha, about 7 km (4 miles) from the heart of Damascus, has formed a base for rebel fighters to bombard the capital with mortars in Syria’s three-year-old civil war.

The Britain-based, pro-opposition Syrian Observatory for Human Rights said government warplanes attacked several areas in the town. A Syrian rebel source said government forces had taken most of Mleiha and were using planes to attack the last point of resistance. Some of the rebels pulled out to nearby villages.

“Everything here is now under the control of the Syrian Arab Army,” a soldier standing near a damaged building told state TV.

“The town of Mleiha is the biggest in Ghouta and used to be a supply route for the gunmen. This will lead to the fall of other towns into the hands of the army,” said an army commander.

Government forces have pushed back the rebels around Damascus with help from Hezbollah, and consolidated Assad’s grip over central Syria and along the border with Lebanon.

The main rebel factions have also lost territory to the Islamic State (IS), an al Qaeda splinter group that has declared a caliphate on lands it has captured in both Syria and Iraq.

The group has been advancing in the northern region of Aleppo in the past 24 hours, seizing several towns and villages from rival Islamists and carrying out executions, the Observatory and opposition activists said.

Already in control of large areas of northern and eastern Syria, Islamic State’s latest gains include the towns of Turkmen Bareh and Akhtarin, 50 km (30 miles) northeast of Aleppo.

Late on Wednesday they advanced to nearby towns including Dabeg and Azizeyeh, now controlling a belt of towns close to the Turkish border.

Survivors from Akhtarin told the Observatory that the group assembled the local men in the town square, looking for fighters who oppose them. They said nine men were beheaded.

Islamic State sympathisers posted on social media pictures of what they said were some of the group’s fighters inside Akhtarin. It showed two fighters with thick beards celebrating by burning a flag of a rival group. Two others raised the black and white flag of IS over what appeared to be a telecom tower.

It was not possible to independently verify the accounts.