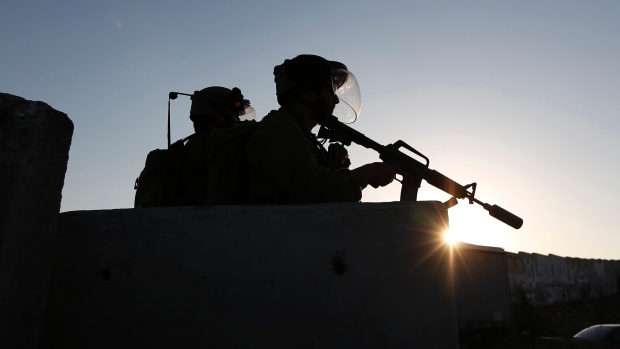 Israeli soldiers keep guard during a Wednesday protest by Palestinians against the Israeli offensive in Gaza, at Qalandia checkpoint near the West Bank city of Ramallah. The threat of renewed war in Gaza loomed on Wednesday as the clock ticked toward the end of a three-day ceasefire with no sign of a breakthrough in indirect talks in Cairo between Israel and the Palestinians. (Mohamad Torokman/Reuters)
Share:

A rocket fired from the Gaza Strip landed inside southern Israel on Wednesday, an Israeli police spokesman said, violating a three-day truce that had another two hours to go before expiry.

Egyptian mediators raced Wednesday to pin down a long-term ceasefire between Israel and Hamas to prevent more fighting in the Gaza war when the current truce expires at midnight.

The two sides considered an Egyptian proposal that partially addresses their demands, but deep differences kept the deal in doubt. Two hours before the cease-fire’s end, Israeli police said a rocket landed in southern Israel, though it hit an open area and caused no damage.

Hamas denied responsibility for the rocket attack and signalled it was open to extending the 72-hour ceasefire, which began Sunday, to allow for more time to negotiate. During the temporary truce, Israel halted military operations in the war-battered coastal territory and Gaza militants stopped firing rockets.

“We have finished talks today without agreement. More work needs to be done to have a better deal,” a Hamas official said. “We are deliberating internally over an offer to extend the ceasefire.”

The official said there remained disagreements over amendments to the Egyptian proposal requested by Hamas. The Islamic militant group wants to clarify phrasing on certain points, including reconstruction efforts for Gaza and the movement of individuals and goods, said the official, who spoke on condition of anonymity because he was not authorized to discuss the talks with journalists.

A spokesman for Israel’s prime minister declined to comment.

A cease-fire extension would grant both sides additional time to negotiate a more sustainable truce and a roadmap for the coastal territory.

Hamas is seeking an end to a crippling blockade imposed by Israel and Egypt in 2007. The blockade has greatly limited the movement of Palestinians in and out of the territory of 1.8 million people. It has also restricted the flow of goods into Gaza and blocked virtually all exports.

Israel says the closure is necessary to prevent arms smuggling, and officials are reluctant to make any concessions that would allow Hamas to declare victory.

Israel wants Hamas to disarm, or at least be prevented from re-arming. Hamas has recovered from previous rounds of violence with Israel, including a major three-week ground operation in January 2009 and another weeklong air offensive in 2012. It now controls an arsenal of thousands of rockets, some with long ranges and powerful. Gaza militants fired more than 3,000 rockets toward Israel during the war.

Neither side is likely to see all of its demands met, but the Egyptian proposal tabled Tuesday offered some solutions. A member of the Palestinian delegation at the Cairo talks said the proposal calls for easing parts of the Israeli blockade of Gaza, bringing some relief to the territory.

The proposal leaves the key areas of disagreement, including Hamas’s demand for a full lifting of the blockade and Israeli calls for Hamas to disarm, to later negotiations.

The Palestinian negotiator said he had some reservations about the proposal and would try to improve it.

“We would like to see more cross-border freedom, and also to have the question of a Gaza seaport and airport discussed,” he said.

The Palestinian official spoke on condition of anonymity because he was not authorized to discuss negotiations with journalists.

As the talks continued, Hamas indicated it was sticking to its demands.

In recorded remarks broadcast on Hamas radio Wednesday, Ismail Haniyeh, the top Hamas leader in Gaza, said that “achieving a permanent truce can come only through lifting the blockade on Gaza.”

Israel, meanwhile, signalled it was ready to respond to renewed fire from Gaza following the end of the cease-fire.

“We will continue to defend, continue to operate. We will be ready for any effort, any way, at any time,” Israel’s chief of staff, Lt. Gen. Benny Gantz, told reporters.