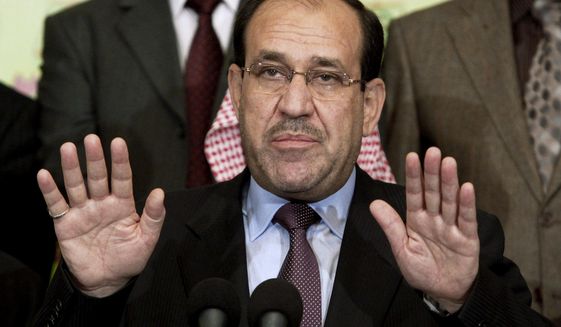 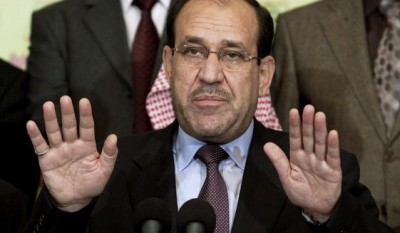 Arab League Arab League chief Nabil al-Arabi also backed al-Abadi, the deputy speaker of parliament who was nominated for the post on Monday by Iraqi President Fouad Massoum. Al-Abadi has 30 days to name a cabinet that can win the backing of parliament.

Al-Maliki, however, has insisted in keeping the job, warning that he will mount a legal challenge to the nomination, which he branded as unconstitutional.

At the same time, al-Maliki appeared to back off moves, like deploying special security units around Baghdad, that raised the specter of a possible coup.


Instead, he released a statement on his website in which he urged members of the armed forces “to stay away from the political crisis and to commit to their military and security duties and tasks to protect the country, and not to intervene in this crisis.”

“Leave this issue to the people, politicians and justice,” said al-Maliki, who reiterated the message in an Iraqi TV appearance flanked by military figures.

Secretary of State John Kerry on Tuesday urged al-Abadi to form an inclusive government “as swiftly as possible.” He said the U.S. “stands ready to support a new and inclusive Iraqi government and particularly its fight against (the Islamic State).”

“Let me be very clear,” Kerry said, “we have always wanted an inclusive government that represents … all Iraqis. That is the goal.”

The Obama administration has criticized al-Maliki, a Shiite, for alienating many among the Sunni and Kurd minorities, saying this has given rise to the Islamic State jihadists who have captured large parts of northern Iraq.

The political uncertainty in Baghdad comes as the U.S. continues to mount airstrikes against Islamic State fighters. The U.S. has also begun providing arms to the Iraqi Kurd forces battling the extremists.

The U.S. and its allies, as well as Iraq, have also continued sending relief supplies to thousands of members of the Yazidi sect who were driven out of their villages by Islamic State militants, which threatened to kill them if they did not convert to Islam.

The refugees took to the Sinjar mountain range near the Syrian border with little food and water.

Iraq’s military spokesman, Lt. Gen. Qassim al-Moussawi, told state television that an Iraqi aid helicopter crashed Tuesday during takeoff and hit a mountain after too many people scrambled aboard.

The New York Times reported that its reporter, Alissa J. Rubin, who was aboard the helicopter, suffered an apparent concussion and broken wrist. She was evacuated from the region for medical treatment.

The Associated Press reported that the Pentagon has 250 military advisers on the ground in Iraq and is considering sending more to help plan next U.S. actions. Pentagon spokesman Col. Steven Warren said Tuesday “We’re continuing to support the Iraqi government’s request to provide humanitarian assistance and we’re continuing to explore additional options on how best to provide critical relief to the Yazidi people, at the request of the Iraqi government.”