After attacking Obama, Clinton getting ready to hug him 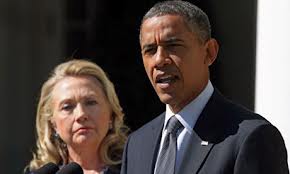 Hillary Rodham Clinton is making her presence felt on President Barack Obama’s summer vacation — in more ways than one.

The potential 2016 presidential candidate happens to be holding a signing of her memoir from her time as Obama’s secretary of state Wednesday on Martha’s Vineyard, where her former boss is on a two-week getaway from Washington.

And while the commander in chief has been trying to balance leisure time while engaging in global crises, Clinton weighed in with a magazine interview that distanced herself from some of his handling of foreign policy.

Clinton called the president at his vacation home Tuesday to tell him she wasn’t trying to attack him. And her spokesman says she plans on “hugging it out” with Obama when both are scheduled to attend an island party Wednesday night for Ann Jordan, wife of Democratic adviser Vernon Jordan.

Clinton, who carried out Obama’s diplomacy in his first term, described a different approach she would take in places like Syria and the Mideast and rebuked Obama’s cautious approach to global crises.

“Great nations need organizing principles, and ‘don’t do stupid stuff’ is not an organizing principle,” she told The Atlantic, referring to a version of the phrase Obama and his advisers have used privately to describe his approach to foreign policy.

Clinton spokesman Nick Merrill said Clinton has frequently touted Obama’s achievements and was honored to be part of his team, despite some differences.

“Some are now choosing to hype those differences but they do not eclipse their broad agreement on most issues,” Merrill said in a written statement Tuesday. “Like any two friends who have to deal with the public eye, she looks forward to hugging it out when they see each other tomorrow night.”

Clinton’s signing of “Hard Choices” is scheduled at the Bunch of Grapes bookstore, an independent shop that Obama often visits to pick up some vacation reading.