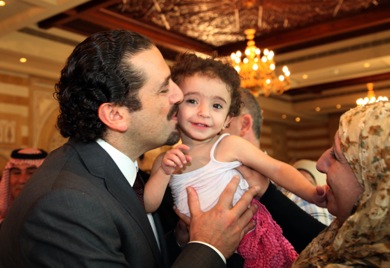 Former lebanese PM and Future Movement leader MP Saad Hariri announced on Monday that he will donate $15 million to rebuild the border town of Arsal after it was destroyed in the clashes between the Lebanese army and Syrian militants.

“I would like to inform you that I will donate $15 million to Arsal to build schools and hospitals and necessary projects that the town needs,” Hariri told a delegation from Arsal.

He also said that a committee will be formed especially to decide how the money will be spent.

Hariri added: “I want to affirm to you that we will make sure that what happened in Arsal will never happen again.”

“There is no doubt that the losses in people and properties that your town has suffered from are great, but we thank God that the plan to strike Arsal has been exposed and we must use all available means to protect this town.”

The Future leader also promised “to make all possible efforts to give the town its natural share of vital projects through the government.”