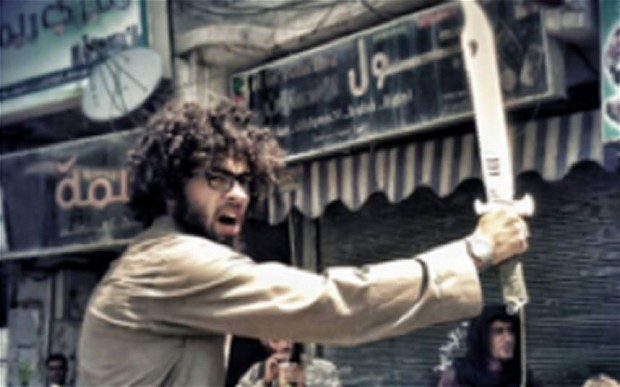 Islam Yaken, he has been both lionised and demonised back home as the ”hipster jihadi”. Photo: TWITTER
Share:
Islamic State jihadists ruling over much of Syria and Iraq have a new icon, whose fashionably styled curly hair and black-rimmed glasses contrast strikingly with the pose in which he has been photographed: astride a horse, and waving a shining scimitar above his head.

Identified by friends as a young Egyptian university graduate from a well-off Cairo family, Islam Yaken, he has been both lionised and demonised back home as the “hipster jihadi”.

Although he is said to have once been a supporter of Egypt’s Muslim Brotherhood former president, Mohammed Morsi, his friends say there was little to suggest his sudden change of life direction a year ago.

His page on the social media site VK suggest a young man apparently obsessed with his body – it is dominated by a series of pictures of him in a gym, showing off his toned physique.

Now he uses Twitter to glorify the “Caliphate” of Abu Bakr al-Baghdadi, the leader of the Islamic State, and to post gory pictures including one of two heads in a basket, which he compares to the heads of sheep that can be ordered for the table in specialist Egyptian restaurants.

“Islam Yaken’s story is freaking scary,” wrote one former school-mate, Aliya Mikkawi, on her own Twitter account. “He used to be at school with me.”

Yaken was educated at the French Lycée in Heliopolis, an upmarket suburb of Cairo near the presidential palace, and speaks English and French as well as Arabic. He then went on to the prestigious Ain Shams University to study law, graduating last year.

His tweets from before he left for jihad show a more secular bent. “Kissing Burns 6.4 Calories A Minute,” says one from 2011.

Now he is trying to persuade his family to come and join him in Raqqa, the city on the River Euphrates in Syria that Islamic State has now controlled for a year. “I spoke with my mother and told her to come and stay in this flat on the Euphrates,” he wrote.

“She can eat and drink and study, with the family and everything. She replied, ‘My son, what would happen if the owners of the flat came back? What will you do then?’ I told her not to worry – they are dead and gone.”

Friends told local media that he was a member of the local Balance Gym, and that he had always been “funny but respectful”.

They said they had no inkling of his decision to turn jihadi, though he had once referred to Mr Morsi, whom he previously supported, as an “infidel”, reflecting the position of hardline Islamists such as al-Qaeda that the Muslim Brotherhood should not have involved itself in democratic politics.

Although he has not replied to requests for interview, he has shown he is aware of the media interest his pictures have aroused, thanking newspapers and television stations for helping to “mobilise” popular knowledge of the cause.

To those who have abused him, he has a simple response: “Some people insulted me but that’s normal – it’s just nonsense talk,” he wrote.

“But there are two people who insulted our religion, and I advise them that when God opens up Egypt to us, if they are still alive, we will hit their delete button.”
By: Richard Spencer and Magdy Samaan
The daily Telegraph