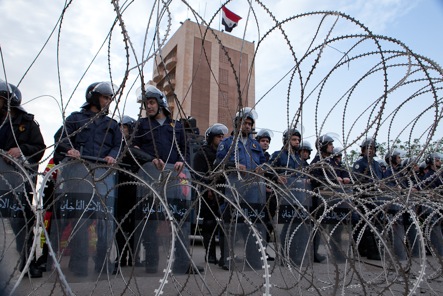 BEIRUT – The Lebanese Armed Forces pushed protesters back from the entrance of the Egyptian embassy in Beirut on Saturday and fired tear gas canisters after a demonstration to show solidarity with Palestinians in the Gaza Strip turned violent.

When a Molotov cocktail was thrown at the entrance to the embassy in Beirut’s Bir Hassan neighborhood the LAF intervened, forcing the demonstrators back beyond the barbed wire fence surrounding the building and firing a number of tear gas canisters, the National News Agency reported.

The protesters then proceeded to block the road leading to the embassy. Shortly after the embassy’s entrance was attacked and the LAF intervened.

The protest was organized by a group calling itself the Lebanese and Palestinian Youth Forces and called for an end to the siege on Gaza and the opening of the Rafah crossing.

Over 1660 Palestinians have been killed in Israel’s 25-day old military campaign against Gaza—dubbed Operation Protective Edge—which has seen the Jewish state’s air force batter the coastal enclave while ground forces have been engaged in pitched battles with Hamas fighters.