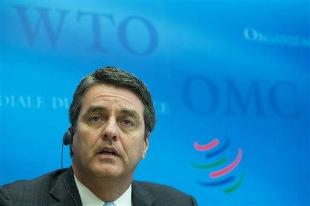 Several member states of the World Trade Organisation voiced frustration after India’s demands for concessions on agricultural stockpiling led to the collapse of the first major global trade reform pact in two decades.

WTO ministers had already agreed the global reform of customs procedures known as “trade facilitation” in Bali, Indonesia, last December, but were unable to overcome last minute Indian objections and get it into the WTO rule book by the July 31 deadline.

“We have not been able to find a solution that would allow us to bridge that gap,” WTO Director-General Roberto Azevedo told trade diplomats in Geneva, just two hours before the final deadline for a deal lapsed at midnight (2200 GMT Thursday).

Most diplomats had expected the pact to be rubber-stamped this week, marking a unique success in the WTO’s 19-year history which according to some estimates would add $1 trillion and 21 million jobs to the world economy.

They were shocked when India unveiled its veto and the eleventh-hour failure drew strong criticism, as well as rumblings about the future of the organisation and the multilateral system it underpins.

“Australia is deeply disappointed that it has not been possible to meet the deadline. This failure is a great blow to the confidence revived in Bali that the WTO can deliver negotiated outcomes,” Australian Trade Minister Andrew Robb said on Friday.

“There are no winners from this outcome – least of all those in developing countries which would see the biggest gains.”

But the momentum on trade facilitation reforms means it may be hard to stop and some nations have already discussed a plan to exclude India from the agreement and push ahead regardless.

An Australian trade official involved in the talks, who requested anonymity to speak more candidly, said officials were exhausted with the process and that there was already discussion about major reforms at the WTO and the Doha Round of trade negotiations, which began in 2001.

“Some see it as a final trigger for ending Doha and pressing ahead with plurilateral reform, leave behind those that don’t want to come along,” he said.

LET THOSE WHO WANT TO DO IT, DO IT

India had insisted that, in exchange for signing the trade facilitation agreement, it must see more progress on a parallel pact giving it more freedom to subsidise and stockpile food grains than is allowed by WTO rules.

India’s new nationalist government has insisted that a permanent agreement on its subsidised food stockpiling must be in place at the same time as the trade facilitation deal, well ahead of a 2017 target set last December in Bali.

After Azevedo’s speech, U.S. Ambassador to the WTO Michael Punke was downbeat.

“We’re obviously sad and disappointed that a very small handful of countries were unwilling to keep their commitments from the December conference in Bali, and we agree with the Director-General that that action has put this institution on very uncertain new ground,” Punke told reporters.

But some nations, including the United States, European Union, Australia, Japan and Norway, have already discussed a plan to exclude India from the agreement and push ahead, officials involved in the talks said.

A Japanese official familiar with the situation said that while Tokyo reaffirmed its commitment to maintaining and strengthening the multilateral trade system, it was frustrated that such a small group of countries had stymied the overwhelming consensus.

“The future of the Doha Round including the Bali package is unclear at this stage,” he said.

Asked about going ahead without India, he said: “I think it is all too premature to talk about specifics at this stage.”

New Zealand Minister of Overseas Trade, Tim Groser, told Reuters that there had been “too much drama” surrounding the negotiations and added that any talk of excluding India was “naive” and counterproductive.

“India is the second biggest country by population, a vital part of the world economy and will become even more important. The idea of excluding India is ridiculous,” he said.

“I don’t want to be too critical of the Indians. We have to try and pull this together and at the end of the day putting India into a box would not be productive.”

Still, the failure of the agreement should signal a move away from monolithic single undertaking agreements that have defined the body for decades, Peter Gallagher, an expert on free trade and the WTO at the University of Adelaide, told Reuters.

“I think it is certainly premature to speak about the death of the WTO. I hope we’ve got to the point where a little bit more realism is going to enter into the negotiating procedures,” he said.

“It’s 153 countries. We can’t all move at the same speed on the same things, and it’s time to let those that want to do it, do it.”