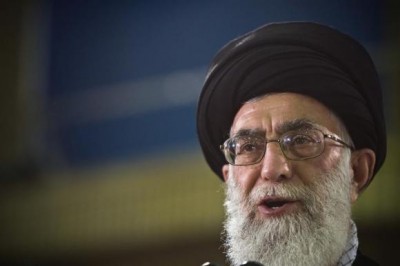 suprIran’s supreme leader Ayatollah Ali Khamenei on Tuesday called Israel a “rabid dog” for its attacks on Gaza, and urged Muslims to arm Palestinians to enable them to counter what he termed genocide.

About 1,087 Gazans, most of them civilians, have been killed in 22 days of fighting between Israel and Palestinian militants in the Gaza Strip. As well as 53 Israeli soldiers killed, three civilians have died as a result of Palestinian shelling.

In a speech marking the end of the Muslim fasting month of Ramadan, Khamenei criticised the United States and European countries for what he said were their efforts to limit the military capacity of Palestinian fighters in the enclave.

Of Israel, he said: “This rabid dog, this rapacious wolf, has attacked innocent people and humanity must show a reaction. This is genocide, a catastrophe of historical scale.”

“They have been pounding innocent people day and night and these men women and children are defending themselves with minimum means, and now Americans and Europeans want to take even that away … so that those merciless beasts could pound without qualm.”

Khamenei denounced what he said was a ruling by U.S. President Barack Obama to disarm Palestinians – an apparent reference to U.S. opposition to efforts by Hamas, the Islamist group that controls Gaza, to obtain weapons such as missiles and rockets. Washington views Hamas as a terrorist organisation.

Khamenei said Iran took the opposite view about arming Palestinians.

“Everyone, whoever has the means, especially in the Islamic world, they should do what they can to arm the Palestinian nation … the Zionist regime deeply regrets starting this (war) but has no way out.”

Israel launched its offensive on July 8 with the aim of halting rocket attacks by Hamas and its allies. It later ordered a land invasion to find and destroy the warren of Hamas tunnels that criss-crosses the border area.

Tehran is at loggerheads with Western powers on a range of foreign policy issues including its nuclear programme and its support for Hamas, Syria’s President Bashar al-Assad and the Lebanese Shi’ite militant movement Hezbollah.

Khamenei’s speech to a crowd of hundreds of thousands in Tehran was broadcast live on state television. Khamenei was accompanied by senior government officials.