Gaza without electricity; Its power plant knocked out by Israeli strike 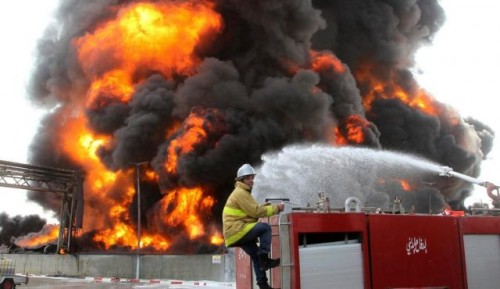 A Palestinian firefighter works during efforts to extinguish a fire at Gaza’s main power plant, which witnesses said was hit in Israeli shelling, in the central Gaza Strip July 29, 2014. Photo by Reuters
Share:

Israeli tank fire hit the fuel depot of the Gaza Strip’s only power plant on Tuesday, witnesses said, cutting electricity to Gaza City and many other parts of the Palestinian enclave of 1.8 million people.

A thick column of black smoke rose from the facility, which supplies the territory with two-thirds of its energy needs, and the fuel containers were in flames.

“The power plant is finished,” said its director, Mohammed al-Sharif.

He said the local fire brigade was not equipped to extinguish the blaze.

An Israeli military spokeswoman had no immediate comment and said she was checking the report.

The plant had already been hit last week and was working at a reduced capacity of about 20 percent, allowing only a few hours of electricity a day for Gaza’s residents.

Israel launched a military offensive in Gaza on July 8, saying it wanted to halt rocket attacks by the dominant Hamas movement and other armed groups. Ten days later, it sent in ground forces with the declared aim of destroying Hamas tunnels that criss-cross the border area.

Though international pressure has been mounting to end the fighting, there is no end in sight to the 22-day conflict in which 1,116 Palestinians, many of them civilians, and 53 Israeli soldiers and three civilians have been killed.