US shuts down and evacuates its embassy in Libya 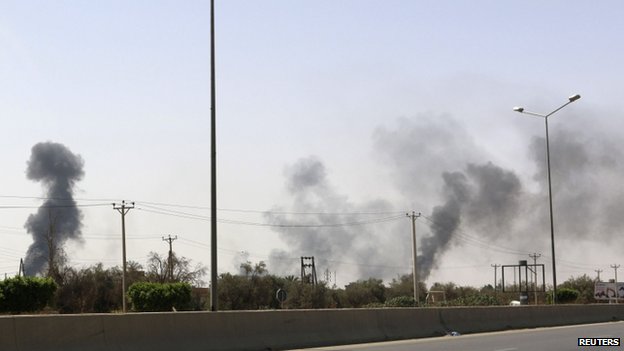 Clashes close to the US embassy forced officials to evacuate staff, the state department says
Share:
The United States shut down its embassy in Libya on Saturday and evacuated its diplomats to neighboring Tunisia under U.S. military escort amid a significant deterioration in security in Tripoli as fighting intensified between rival militias, the State Department said.

“Due to the ongoing violence resulting from clashes between Libyan militias in the immediate vicinity of the U.S. Embassy in Tripoli, we have temporarily relocated all of our personnel out of Libya,” spokeswoman Marie Harf said.

The withdrawal underscored the Obama administration’s concern about the heightened risk to American diplomats abroad, particularly in Libya where memories of the deadly 2012 attack on the U.S. mission in the eastern city of Benghazi are still vivid and the political uproar over it remain fresh ahead of a new congressional investigation into the incident.

“Securing our facilities and ensuring the safety of our personnel are top department priorities, and we did not make this decision lightly,” Harf said. “Security has to come first. Regrettably, we had to take this step because the location of our embassy is in very close proximity to intense fighting and ongoing violence between armed Libyan factions.”

The evacuation was accompanied by the release of a new State Department travel warning for Libya urging Americans not to go to the country and recommending that those already there leave immediately. “The Libyan government has not been able to adequately build its military and police forces and improve security,” it said. “Many military-grade weapons remain in the hands of private individuals, including antiaircraft weapons that may be used against civilian aviation.”

Speaking Saturday in Paris where he was meeting with other diplomats on the continuing Israeli-Palestinian conflict, Secretary of State John Kerry said the U.S. was temporarily shuttering the embassy because of the “free-wheeling militia violence.”

American personnel at the Tripoli embassy, which had already been operating with limited staffing, left the capital around dawn and traveled by road to neighboring Tunisia, according to Harf. As the evacuation was underway, residents of the city reported in real time on social media that American military aircraft flew overhead while U.S. soldiers escorted a convoy of vehicles out of town. The State Department would not confirm the evacuation until all staffers were safely in Tunisia.

The Pentagon said in statement that F-16 fighter jets and other U.S. aircraft provided security. “The mission was conducted without incident, and the entire operation lasted approximately five hours,” the statement said.
The State Department said embassy operations will be suspended until a determination is made that the security situation has improved. Tripoli has been embroiled for weeks in inter-militia violence that has killed and wounded dozens on all sides. The fighting has been particularly intense at the city’s airport.

“We are committed to supporting the Libyan people during this challenging time, and are currently exploring options for a permanent return to Tripoli as soon as the security situation on the ground improves. In the interim, staff will operate from Washington and other posts in the region,” Harf said. The evacuated staffers will continue to work on Libya issues in Tunis, elsewhere in North Africa and Washington.

The move marks the second time in a little more than three years that Washington has closed its embassy in Libya. In Feb. 2011, the embassy suspended operations amid the uprising that eventually toppled longtime leader Moammar Gadhafi. After the formation of a transitional government in July, 2011, the embassy reopened in September. Gadhafi was killed in October of 2011.

The Obama administration has been particularly sensitive about security of U.S. government employees in Libya since the Sept. 11, 2012, attack on the U.S. mission in the country’s second largest city of Benghazi that killed ambassador Chris Stevens and three other Americans. The administration is still fending off criticism from Republicans and others that it did not either enhance security in Benghazi or evacuate the mission due to rising violence in that city in the months prior to the attack.

The Benghazi mission was abandoned after that attack and never reopened. The embassy In Tripoli has been operating with reduced staff since but has remained open even as the violence intensified.

On Friday, U.S. Ambassador to Libya Deborah Jones appealed for fighting near the embassy to stop. “We have not been attacked but our neighborhood a bit 2 close to the action,” she tweeted. “Diplomatic missions 2 B avoided pls.” On Sunday, Jones tweeted about “heavy shelling and other exchanges” of fire in the vicinity of the embassy and speculation about the potential evacuation had been rife at the State Department for more than a week.

Libya is now witnessing one of its worst spasms of violence since Gadhafi’s ouster. In Tripoli, the militias are fighting mostly for control of the airport. They are on the government’s payroll since authorities have depended on them to restore order.

The U.S. is just latest in a number of countries to have closed down their diplomatic operations in Libya. Turkey on Friday announced that it had closed down its embassy and militia clashes in Benghazi have prompted the United Nations, aid groups and foreign envoys to leave.

In Tripoli, clashes near the international airport have forced residents to evacuate their homes nearby after they were hit by shells. On Friday, the official Libyan news agency LANA reported that explosions were heard early in the day near the airport area and continued into the afternoon.

The battle in Tripoli began earlier this month when Islamist-led militias — mostly from the western city of Misrata — launched a surprise assault on the airport, under control of rival militias from the western mountain town of Zintan. On Monday, a $113 million Airbus A330 passenger jet for Libya’s state-owned Afriqiyah Airways was destroyed in the fighting.

The rival militias, made up largely of former anti-Gadhafi rebels, have forced a weeklong closure of gas stations and government offices. In recent days, armed men have attacked vehicles carrying money from the Central Bank to local banks, forcing their closure.

Libyan government officials and activists have increasingly been targeted in the violence. Gunmen kidnapped two lawmakers in the western suburbs of Tripoli a week ago and on Friday armed men abducted Abdel-Moaz Banoun, a well-known Libyan political activist in Tripoli, according to his father.

An umbrella group for Islamist militias, called the Operation Room of Libya’s Revolutionaries, said in a brief statement on its Facebook page on Friday that “troops arrested Abdel-Moaz over allegations that he served under Gadhafi” and “instigated rallies against” the Islamists.