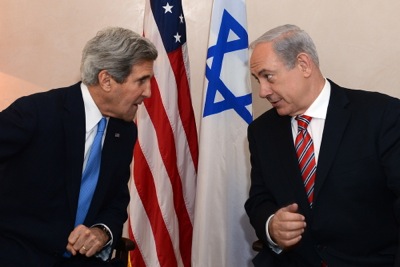 US Secretary of State John F. Kerry flew to Israel Wednesday to push for a cease-fire in the 16-day-old conflict with Hamas militants.

His travel on a U.S. Air Force plane was not restricted by the FAA warning against commercial airline travel to the Israeli airport.

In light of the FAA warning against commercial airline travel to Israel’s main airport near Tel Aviv, where a Hamas-fired rocket hit a house in a nearby town yesterday, Israel’s Transportation Minister Yisrael Katz announced early Wednesday that it would open an additional airport in the country’s south. Ovda airport was closed as a commercial airport several years ago and sits close to Israel’s southern-most town Eilat, near the border with Egypt.
The airport will begin operating at noon, the minister said. It was still unclear if U.S. and European flights would agree to land their jets at Ovda airport.

The Israel Airports Authority said Tuesday that 80 flights to and from Israel had been cancelled in light of the FAA decision, leaving thousands of Israelis stranded around the world and thousands more visitors to Israel stuck here.
The suspension of flights by all American and some major European carriers reflected the group’s ability to affect Israel’s economy with its rockets, one of which struck within a mile of the international airport near Tel Aviv on Tuesday, prompting the Federal Aviation Administration’s flight ban.

By Tuesday night, Israeli Prime Minister Benjamin Netanyahu had phoned Kerry to appeal for a resumption of U.S. flights to Israel, underscoring fears here that the country might be labeled a war zone and suffer damage to its tourism, high-tech and investment sectors. A U.S. State Department statement said the ban was meant only to protect American citizens, in an apparent effort to prevent the measure from being seen as U.S. pressure on Israel to agree to Hamas demands.
But despite a diplomatic push by Kerry and other world leaders, there was no trace of progress Tuesday toward reviving an Egyptian truce proposal rejected by Hamas a week ago or amending it to make it more attractive to Hamas, as the United States is quietly urging. Israel accepted the proposal, but Hamas said it met none of the group’s demands.

Those demands, Hamas leaders conveyed to Palestinian Authority President Mahmoud Abbas on Tuesday in Doha, Qatar, include the end of Israel’s naval blockade of Gaza and the release of several hundred Hamas prisoners.

“We are continuing to work, and there is more work to be done,” Kerry said after meetings at Egypt’s presidential palace.

By Tuesday night, the Palestinian death toll had risen to more than 630 since the conflict erupted July 8, according to officials with the Gaza Health Ministry, with more than half the deaths occurring since Israel launched its ground incursion Thursday night. The United Nations says more than 70 percent of the casualties are civilians, including many children. Israel says it has killed as many as 180 militants.
Overnight, Israel’s military announced that two more Israeli soldiers had been killed Monday, bringing the Israeli armed forces’ death toll to 27 since Thursday — the largest number of Israeli troop deaths since the 2006 war with Lebanon. Two Israeli civilians have also been killed by Hamas mortar and rocket attacks into Israel.

Throughout Tuesday, Israel continued to pound Hamas targets in Gaza with airstrikes and from naval vessels off the coast, while Hamas sent a steady barrage of rockets into Israel. One projectile struck a house in Yehud, in central Israel near Ben Gurion International Airport.

The attack injured one person, but it persuaded the FAA to ban U.S. flights to and from Ben Gurion for 24 hours starting Tuesday afternoon. Airlines including Delta, US Airways, United, Air France and Lufthansa suspended their Israel flights.

In Gaza, Hamas fighting units are proving to be tenacious, trained and sometimes deadly. According to an Israeli military account released Tuesday, a firefight between members of an elite paratrooper unit and Gaza militants left one paratrooper dead and several wounded. Hamas lost seven fighters in the exchange.

Also Tuesday, a senior Israeli military official, speaking to journalists in Tel Aviv, suggested that there was a possibility that a missing soldier, Oron Shaul, could have been captured alive by Hamas or another militant faction in Gaza.

Shaul was one of seven Israelis inside an aging armored personnel carrier (APC) pushing Sunday into the Shijaiyah enclave of East Gaza, a Hamas stronghold peppered with some of the tunnel networks that Israel says it entered Gaza to destroy. Their vehicle appeared to have a technical malfunction or was somehow prevented from moving forward, the military official said.

“It was stuck in the middle of the action, and it’s possible that some of the guys got out to fix it or tie it up to another APC,” said the official, who spoke on the condition of anonymity in accordance with military procedure.

As the vehicle stood stuck on the road, he said, Hamas militants struck it with an antitank missile, possibly causing the fuel tank to explode, blowing up and killing all of the soldiers who were inside. It was unclear, the official said, whether Shaul was inside or outside the vehicle when it was hit.

The bodies of the soldiers were burned beyond recognition, and tests had to be conducted to identify the remains. Six of the seven soldiers were identified, the military said.

“For the time being, no parts of his [Shaul’s] body have been found among the ruins of the APC,” the senior Israeli military official said.

Later Sunday, a Hamas spokesman said in a televised statement that a soldier named Shaul Aron is “a prisoner now” and displayed what he said was Shaul’s photo ID and serial number.

It is not clear that Israel is ready to halt the offensive. Senior Israeli politicians have vowed not leave Gaza until Israel has destroyed all the Hamas tunnels stretching from Gaza into Israel. Hamas has also pledged to continue to fight.

On Tuesday, addressing reporters, Kerry was deferential to Egypt, stressing that his role is to assist the longtime Arab power broker as it leads the cease-fire efforts. Egyptian Foreign Minister Sameh Shoukry thanked Kerry for the U.S. backing but stressed that the Egyptian proposal had received “wide support” on its own.

A senior State Department official, though, later said a truce is not immediately at hand.

“Right now our focus is on stopping the rocket fire so that we can begin a serious negotiation on the key issues,” said the official, who spoke on the condition of anonymity to describe Kerry’s objectives.