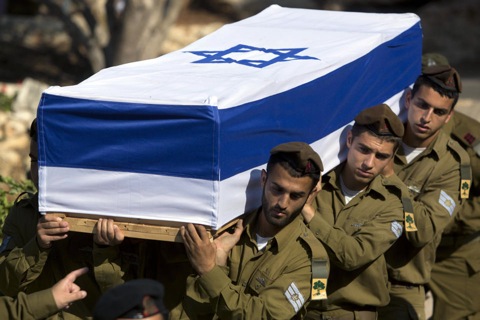 Israeli soldiers carry the coffin of Staff Sgt. Moshe Melako, 20, during his funeral at the Mount Herzel military cemetery in Jerusalem, Monday, July 21, 2014. Melako was one of 13 soldiers killed in several separate incidents in Shijaiyah on Sunday, as Israel-Hamas fighting exacted a steep price, killing scores of Palestinians and more than a dozen Israeli soldiers. In Israel, a country where military service is mandatory for most citizens, military losses are considered every bit as tragic as civilian ones. (AP Photo/Sebastian
Share:

For almost two weeks, Israel practically bristled with confidence and pride: The Iron Dome air defense system was dependably zapping incoming Hamas rockets from the skies, the military was successfully repelling infiltration attempts on the ground and from the sea, and the conflict with Hamas was causing almost no casualties in Israel.

That has changed in what seems like a flash, after at least 25 soldiers were killed and scores injured — a predictable yet still stunning outcome of the fateful decision, announced late Thursday, to send troops and tanks by land into Hamas-ruled Gaza.

In a country where military service is mandatory for most citizens, and military losses are considered every bit as tragic as civilian ones, the reaction to the setbacks was electric. Newspapers and broadcasts have been dominated by images and tales of the fallen — mostly young faces barely out of high school — and interviews with parents concerned for offspring so clearly now imperiled.

Angst over the highest military toll since the 2006 Lebanon war now mixes with a cocktail of emotions: on one hand, a strong current of determination to press on with efforts to end the rocket fire from Gaza; on the other, the sinking feeling that a quagmire is at hand.

“It’s ugly and it’s no walk in the park,” said Alon Geller, a 42-year-old legal intern from central Israel. “But we have to finish the operation. If we stop now before reaching our goals, the soldiers will have died in vain.”

But the Haaretz newspaper warned against mission creep and the “wholesale killing” of Palestinian civilians. “The soft Gaza sand … could turn into quicksand,” it said in its editorial Monday. “There can be no victory here. … Israel must limit its time in the Strip.”

There was always near-consensus among Israelis for the airstrikes aimed at ending the rocket fire, which they considered unreasonable and outrageous. The Palestinian fatalities caused by the airstrikes — over 500 in two weeks, many of them civilians — are generally blamed here on Hamas, for locating launchers in civilian areas and for proving to be cynical and nihilistic, to Israeli eyes, at every turn.

But a ground invasion of Gaza is another story, and the government had clearly hesitated to take the risk. House-to-house fighting, tanks exposed in fields, the danger of a soldier being kidnapped, to be traded for thousands after years in captivity: It is an untidy and dispiriting affair.

The government felt it necessary to take such a risky step because despite all the damage being inflicted on Gaza by the airstrikes, the Hamas rocket fire simply did not stop. Israeli officials also felt world opinion would understand after Hamas rejected a cease-fire proposal that Israel had accepted.

Complicating the situation from Israel’s perspective, Hamas does not seem to be coming under significant pressure from the people of Gaza despite the devastation they are enduring. While Gaza is no democracy and Hamas rules by force, this seems to reflect genuine support for Hamas’ aim of breaking the blockade imposed by Israel and Egypt on the strip.

Emboldened, Hamas ratcheted up attempts to carry out deadly attacks against Israeli border communities through tunnels dug underneath the fence separating Israel from Gaza. For Israelis, that raised a terrifying specter of families in placid farming areas on the edge of the Negev desert waking up to find swarms of Islamic militants in their midst.

“This brought it home that they are out to kill us and we have to stop them,” said Yehuda Ben-Meir, a political analyst at the Institute for National Security Studies. “No one can say he (Prime Minister Benjamin Netanyahu) was trigger-happy. It convinced the Israeli public that the decision taken by Netanyahu came from a sense of ‘we have no other choice.'”

Despite the absence of panic Monday, it is clear that if soldiers continue to be killed at this rate, the flexibility enjoyed by Netanyahu to date will likely be replaced by a growing sense of urgency to stop the casualties. Many Israeli leftists will demand an end to the operation. Hard-liners will demand more radical action, up to and including a takeover of Gaza. That will add to the already mounting pressure from an outside world horrified by the carnage on the Palestinian side.

The prime minister is probably mindful that the popularity tipping point for his predecessor, Ehud Olmert, came when the public concluded too many soldiers were being killed and that the military was not fully prepared during the 2006 war.

Some — in the government and on the street — are already calling for a total invasion aimed at ousting Hamas, even if this leaves Israel again occupying a hostile and impoverished population of 1.8 million, as it did for nearly four uncomfortable decades until its pullout from Gaza in 2005. For the moment the ground operation is mostly limited to areas relatively near the Israeli border, where Israel is shutting down tunnels and hunting for rocket launchers; a takeover of Gaza City would probably be much more costly still.

“I hate war. I’m pained by every death,” said Haviv Shabtai, a 61-year-old Jerusalem bus driver who has served in several wars, has a son currently called up, and had opposed a ground invasion because of the risk. Shabtai said he took the losses personally and was even physically overwhelmed at the news.

“After recovering from that shock,” he said, “I say go all the way.”