No Dollars, no cars . Venezuela’s auto industry in a free fall 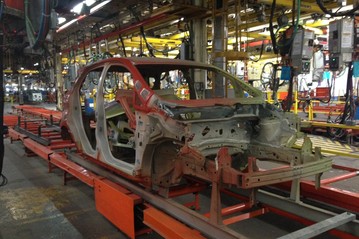 Production at Ford has dropped to a trickle of cars a day, leaving its about 2,500 assembly workers in Venezuela with little to do. Ezequiel Minaya for The Wall Street Journal
Share:
VALENCIA, Venezuela—This car-crazed country’s auto industry, once the third largest in South America, is in free fall with assembly plants like Ford’s 20-acre complex here in Venezuela’s auto-making heartland producing only a trickle of new vehicles.

The nation’s car makers, including global giants like Ford Motor Co. , Fiat Chrysler Automobiles NV, General Motors Co. and Toyota Motor Corp. , have cut output by more than 80% in the first six months of the year compared with a year earlier because of a lack of dollars to pay parts suppliers, according to data compiled by the Automotive Chamber of Venezuela, which represents car makers.

“This is the first time I have ever seen things this bad,” said 61-year-old Antonio Lopez, a Ford worker who recently was preparing a sedan for painting on the factory floor. The cavernous plant here in Valencia, about 110 miles west of Caracas, was quiet by midafternoon one day last month, with a handful of workers sweeping up and maintaining equipment on assembly stations.

Ford’s 2,500 workers still arrive each workday, their jobs protected by stringent labor laws, said the secretary-general of the union that represents Ford workers, Gilberto Troya, who led a Wall Street Journal reporter on a tour. But the factory churns out just a few Fiesta compacts and Explorer sport-utility vehicles a day.

“I worry about the plant leaving,” Mr. Lopez said. “This is how my family eats. This is what I’ve done all my life.”

Ford spokesman Chris Preuss said the company has been in talks with Venezuela to obtain more dollars to import parts. He declined to elaborate on the discussions or provide details about the state of Ford’s operations except to say that the Dearborn, Mich., auto maker is focused “on getting all operations in Latin America back to profitability.”

Across Venezuela, car production and sales has been sliding fast. Balance sheets have been battered, with revenue vulnerable to devaluation and trapped in Venezuela because of currency controls. Auto makers built 36,919 vehicles through June of last year. But car plants here have made just 6,161 during the same period this year, about what Argentina produces in three days.

“[Sales] volumes are down 75% below 2013, and last year was the lowest level in a decade,” said Carlos Gomes, an economist who follows the global auto industry for Scotiabank, a unit of Bank of Nova Scotia. “I think it is fair to say that the situation is alarming.”

Economists say that the car industry, like newspapers, bottlers and food processors, has been hard hit by a shortage of dollars that has left many companies scrambling to pay for much-needed imports in a country that produces little more than oil. The reverberations in the economy include companies going out of business, a shortage of basic products and one of the world’s highest rates of inflation.

The car industry this year began on a particularly dire note, with only Toyota andVolvo AB’s Mack de Venezuela powering up their assembly lines. By March, Toyota halted production for three months, followed by Italian truck maker Iveco SpA in April. Ford, General Motors and Chrysler rolled back production amid big losses due to currency devaluations as President Nicolás Maduro’s government tried to address a shortage of dollars by weakening the value of the bolívar.

Mr. Maduro, though, blames the car companies, not the country’s economic policies for hobbling the auto sector. The government fined General Motors last year after accusing the company of selling overpriced car parts. In February, the president publicly criticized Toyota for its plans to cease production, suggesting the Japanese car maker was colluding with his political foes to destabilize his government. GM declined to respond, and Toyota didn’t return calls seeking comment.

“The only thing these little managers want is dollars, dollars and more dollars,” Mr. Maduro then said on state television. “You don’t have to be very intelligent to find that behind these things there are always political interests.”

Venezuela’s Communications Ministry declined to comment. The ministries of finance and industry didn’t return phone calls. A spokeswoman for the Automotive Chamber of Venezuela, which represents foreign auto makers, said the group was in talks with the government and declined further comment.

Since the first car reached Venezuela in 1904, a Cadillac delivered to a Caracas doctor, the automobile has become part of the national identity in a country with close cultural ties to the U.S. Venezuela built highways that were the envy of Latin America. And fuel remains nearly free, giving long life to Detroit’s classic gas-guzzlers, which are common nationwide.

“We love whiskey, beauty queens, fine cars and baseball here,” said Leonardo Casadiego, president of the Venezuelan Association of Antique and Classic Cars. “The money brought in by the oil industry allowed the cars to come flowing in.”

But no longer. Mr. Maduro’s predecessor,Hugo Chávez, made the government the sole source for greenbacks, tightly controlling their disbursement through a stringent currency exchange regime. Billions of dollars were lost as corrupt businessmen billed the government for imports that never took place, government officials have publicly acknowledged. At the same time, billions more over some 15 years went toward election-year spending, critics say.

Economists say the currency regime coupled with excessive spending have planted the seeds for a deepening economic crisis that has rapidly deteriorated since Mr. Chavez’s death last year, leaving Mr. Maduro struggling to contain shortages of everything from cooking oil and sugar to toilet paper and, recently, coffins.

One auto executive, who works for a non-American company and spoke on the condition of anonymity, said the Maduro administration had failed to deliver dollars promised last year through the central bank’s SICAD system, which sells a limited amount of greenbacks at a weakened exchange rate. Auto executives estimate the government has delayed up to $4 billion in payments the car companies need to convert local currency into dollars to pay international suppliers for parts.

“Some companies have shut down their lines because of the lack of materials, others are working at a reduced rate,” said the auto executive. “Eventually, raw materials will finish for us all and there will be zero new cars.”

Buyers seeking new cars can spend years on waiting lists. New car sales totaled 98,878 in 2013, a fall of 80 % since 2007, when car sales peaked at 491,899. Restrictions on car imports, coupled with the fall in car production, have made Venezuela the rare country where used vehicles climb in value.

“I can’t find anything. Prices are climbing daily,” said Jesus Ramirez, a taxi driver who has spent a year trying to replace the 2008 Renault he purchased new for $7,441. He sold the car for over $30,000 five years later.

With inflation at 60% a year, among the highest in the world, Venezuelans protect their earnings by buying cars, among other big-ticket items.

Car parts needed to keep vehicles on the road have also become difficult to find. That has led thieves to steal parts such as batteries from parked cars.

The owner of a car dealership in Caracas, who said he last sold a vehicle in 2009, said he now stays in business by servicing cars. But with spare part shipments tumbling 75%, he said, he fears his business may soon close.

“I spend all day on the phone looking for parts,” the owner said, asking to remain nameless. “We are in survival mode.”

In 2012, Venezuela’s car makers’ output ranked behind only Brazil and Argentina in South America, according to the Paris-based International Organization of Motor Vehicle Manufacturers. This year, Venezuela is now fifth, trailing neighboring Colombia and much smaller Ecuador.

Hector Lucena, an auto industry expert at the University of Carabobo in Valencia, said that while roughly 15,000 assembly plant workers remain on payrolls, both Chrysler and General Motors have petitioned the government for permission to shed several hundred jobs. Unprotected positions in related businesses—from car dealerships to repair shops to parts manufacturers and others, employing more than 75,000 people—already have suffered losses, he added.

“There has never been a year uglier than this,” said Mr. Lucena.

Still, he said the companies are unlikely to leave Venezuela because of the high cost of rebuilding operations if they decided to return. “They seem to be positioning themselves to be much smaller,” Mr. Lucena said. “This could be the norm now.”