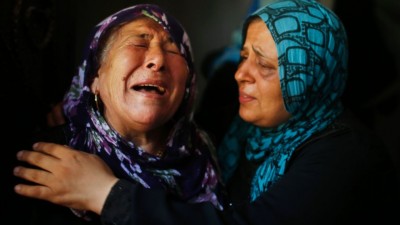 Palestinian women mourn during the funeral of their relatives in Gaza
Share:
Hamas’s armed wing said on Sunday it had captured an Israeli soldier, as fighting in Gaza led to the bloodiest losses in a nearly two-week military offensive, with some 100 Palestinians and 13 Israeli soldiers killed.

The Israeli military said it was checking on the reported capture, which was announced in a Hamas television broadcast. Israeli television stations ignored the report in their extended evening programing about the offensive.

“Qassam Brigades captured a Zionist soldier,” said Abu Ubaida, the masked spokesman of the Izz el-Deen al-Qassam Brigades, the armed wing of Hamas, who identified the soldier as Shaul Aron and recited what he said was Aron’s identity tag number.

He provided no other evidence the soldier was in the custody of the Islamist militants.

Ubaida said the capture happened during the same battle in which 13 Israeli soldiers died earlier, near Shejaia, the embattled neighborhood east of the city of Gaza where most of the Palestinian casualties occurred on Sunday.

The one-day death toll was the highest for the Israeli military’s since a 2006 war against Hezbollah guerrillas in Lebanon. It also represented the most Palestinians killed since fighting began on July 8.

Aron would be the first Israeli soldier held captive in Gaza since 2011, when Israel released about 1,000 Palestinian prisoners to free Gilad Shalit, a soldier who was held for more than five years after his 2006 capture in a cross-border raid.

Cries of celebration and fireworks were heard around Gaza shortly after the Hamas broadcast on Sunday.

Palestinian President Mahmoud Abbas accused Israel of carrying out a massacre in Shejaia and declared three days of mourning.

Israel’s army said it had been targeting militants from Gaza’s dominant Hamas group, whom it alleged had fired rockets from Shejaia and built tunnels and command centers there. The army said it had warned locals two days earlier to leave.

Army sources said seven of the 13 Israeli soldiers were in an armored personnel carrier hit by anti-tank fire. Others were killed setting up positions inside houses they had taken over, the sources added.

Residents fled Sunday’s fighting along streets strewn with bodies and rubble, many of them taking shelter in Gaza’s Shifa hospital.

Cries of “Did you see Ahmed?” “Did you see my wife?” echoed through the courtyard. Inside, dead and wounded lay on blood-stained floors.

The Shifa hospital director, Naser Tattar, said 17 children, 14 women and four elderly were among 62 Palestinians killed, and about 400 people were wounded in the Israeli assault.

Gaza’s Health Ministry said 37 other Palestinians were also killed on Sunday, bringing the Gaza death toll since an Israeli air and naval bombardments began on July 8 to 434, many of them civilians. Some 2,600 Palestinians have been wounded, it said.

Eighteen Israeli soldiers and two Israeli civilians have been killed since the launch of the offensive, which expanded on Thursday into a ground push, following mounting cross-border rocket attacks by militants.

Palestinian fighters kept up their rocket fire on Israel on Sunday. Sirens sounded in southern Israeli towns and in the Tel Aviv metropolitan area. There were no reports of casualties from those salvos.

In a telephone conversation with Israeli Prime Minister Benjamin Netanyahu – their second in three days – U.S. President Barack Obama “raised serious concern about the growing number of casualties” on both sides of the conflict, the White House said.

Netanyahu, addressing a news conference in Tel Aviv after the military released news of the soldiers’ deaths, pledged to press on with the campaign with the goals of “restoring quiet” while “significantly” damaging Hamas and other militant groups’ infrastructure in Gaza.

“We are undeterred. We shall continue the operation as long as is required,” Netanyahu said.

U.S. Secretary of State John Kerry will travel to Cairo on Monday to meet with Egyptian officials about the crisis, U.S. State Department spokeswoman Jen Psaki said in a statement, adding that the United States was deeply concerned about the risk of further escalation and was pushing for a ceasefire.

Earlier on Sunday, Kerry said he supported Israel’s efforts to destroy tunnels it says Gaza militants use for infiltration attempts and to hide weaponry.

“We support Israel’s right to defend itself against rockets that are continuing to come in,” Kerry told Fox News.

Thousands streamed out of Shejaia, some by foot and others piling into the backs of trucks and sitting on the hoods of cars filled with families trying to get away. Several people rode out of the neighborhood in the shovel of a bulldozer.

Video given to Reuters by a local showed at least a dozen corpses, including three children, lying in streets, though the footage could not be verified independently.

“As we moved into Shejaia we were met by anti-tank missiles, RPGs (rocket-propelled grenades), heavy, extensive weapons fire at the forces from the houses, from the surrounding buildings,” said Lieutenant-Colonel Peter Lerner, an Israeli military spokesman.

Israeli Defence Minister Moshe Yaalon said some of the Israeli firepower was unleashed to try to extricate soldiers who had come under attack.

The Israeli military said it beefed up its presence on Sunday, with a focus on destroying missile stockpiles and the vast tunnel system Hamas built along the frontier with Israel.

“I estimate that within two or three days the major part of the tunnels will have been destroyed,” Yaalon said at the news conference where Netanyahu also spoke.

Netanyahu has accused Hamas of using non-combatants as human shields, and he told CNN the army was concentrating on military targets.

“All civilian casualties are unintended by us, but actually intended by Hamas. They want to pile up as many civilian dead as they can … it’s gruesome,” Netanyahu said. “They use telegenically-dead Palestinians for their cause. They want the more dead the better.”

The U.N. Relief and Works Agency said that 81,000 displaced people had now taken refuge in 61 UNRWA shelters in Gaza.

Egypt, Qatar, France and the United Nations, among others, have all been pushing, with little sign of progress, for a permanent ceasefire in the worst surge of Israeli-Palestinian fighting in two years.

Qatar was due to host a meeting between Abbas and U.N. Secretary-General Ban Ki-moon on Sunday, a senior Qatari source told Reuters.

Speaking in Doha, Ban described the fighting in Gaza as an “open wound and we must stop the bleeding now.” He was due to travel to Kuwait, Egypt, Israel, the Palestinian Territories and Jordan during the week, a U.N. statement said. The Qatari source said Abbas would also meet Hamas leader Khaled Meshaal.

The Western-backed Abbas in April struck a reconciliation deal with Hamas, which seized the Gaza Strip in 2007 from forces loyal to his Fatah movement. The agreement led to the formation of a Palestinian unity government and Israel’s pullout from U.S.-brokered peace talks.

Hamas has already rejected one Egyptian-brokered truce, saying any deal must include an end to a blockade of the coastal area and a recommitment to a ceasefire reached after an eight-day war in Gaza in 2012.

The apparent revenge murder of a Palestinian youth in Jerusalem, for which Israel has charged three Israelis, further fueled tension.

Update:
Family of 9 killed
A family of nine Palestinians, including seven children, were killed by an Israeli airstrike on their home in Gaza, said emergency services spokesman Ashraf al-Qudra.
The deaths bring to 485 the number of Palestinians killed since Israel launched an assault on the Gaza Strip two weeks ago. -AFP

Israel denies abduction of its soldier

Israel’s UN ambassador denied on Sunday that an Israeli soldier had been abducted by Hamas militants.
“There is no kidnapped Israeli soldier and those rumors are untrue,” said Ambassador Ron Prosor when asked about the kidnapping. First post