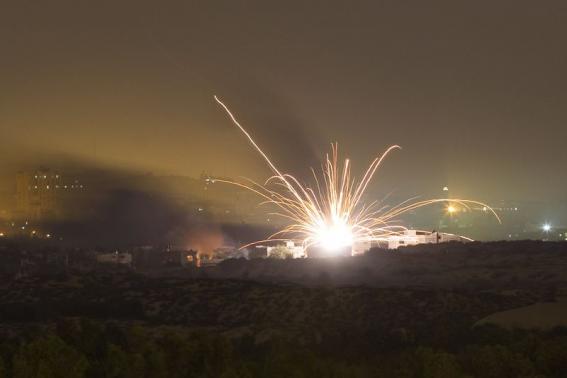 An Israeli rocket is fired into the northern Gaza Strip July 17, 2014. REUTERS/Amir Cohen
Share:
Israel announced on Friday that a soldier had been killed, its first fatality since a Gaza ground offensive was launched the previous evening, and another two soldiers were wounded.

Eleven Palestinians were killed in Gaza, Palestinian health officials said. There was no immediate breakdown of how many were combatants.

Israel launched a Gaza ground campaign after 10 days of bombardments from the air and sea failed to stop militants’ rocket attacks, stepping up an offensive that already has taken a heavy toll in civilian lives.

Israel signalled the invasion would be limited in scope – targeting tunnels dug by gunmen – and said it was not intended to topple Hamas, the Gaza Strip’s dominant Islamist group.

Explosions lit up the sky in the early hours of Friday and residents in several areas of the densely populated strip of 1.8 million Palestinians said they saw small numbers of Israeli tanks that had crossed the border from Israel.

A statement from Prime Minister Benjamin Netanyahu’s office late on Thursday said he had given orders to destroy tunnels that militants use to infiltrate Israel and carry out attacks.

An Israeli military spokesman said Israel was not out to try to topple Hamas.

Hamas spokesman Sami Abu Zuhri responded with defiance to Israel’s invasion announcement, telling Reuters: “We warn Netanyahu of the dreadful consequences of such a foolish act.”

Gaza residents and medical officials reported heavy shelling along the eastern border from the southern town of Rafah to the north of the strip.

Rockets streaked from Gaza toward the southern Israeli towns of Ashdod and Ashkelon. Live television showed interceptions by the Iron Dome anti-missile system, and no casualties were reported.

Israel last mounted a large-scale invasion of the Gaza Strip during a three-week war in late 2008 and early 2009 that claimed 1,400 Palestinian and 13 Israeli lives.

No time frame was announced for the new operation, and the length and intensity of Israel’s assaults could depend on the scale of civilian deaths – casualties likely to boost international pressure for a ceasefire.

The current conflict was largely triggered by the killing of three Israeli teens in the occupied West Bank last month and the death on July 2 of a Palestinian youth in a suspected revenge murder.Israel briefly held its fire on Tuesday after Egypt, which is also Gaza’s neighbour, announced a truce plan, but Hamas and other militant groups rejected the proposal, saying it had not addressed their demands.

“The directive for ground action was approved by the security cabinet after Israel agreed to the Egyptian ceasefire proposal, whereas Hamas rejected it and continued firing rockets at Israeli cities,” the statement from Netanyahu’s office said.

Several hours after the announcement, two residents of Khan Younis, in the southern Gaza Strip, said they could see a small number of Israeli tanks inside Palestinian territory.

A witness in northern Gaza said that several tanks had rolled through Israel’s Erez border crossing to the Palestinian side but had stopped short of residential areas, and that no clashes had ensued.

Gaza health officials said 237 Palestinians, most of them civilians, had been killed since Israel began the air and sea offensive on July 8 in what it called a response to mounting rocket salvoes into its cities. One Israeli civilian has been killed.

The warfare has been the worst between Israel and Palestinians in two years.

United Nations Secretary-General Ban Ki-moon, speaking after the announcement of the ground assault, implored Israel to do more to stop Palestinian civilian deaths.

“I regret that despite my repeated urgings, and those of many regional and world leaders together, an already dangerous conflict has now escalated even further,” Ban said. “I urge Israel to do far more to stop civilian casualties.”

The frequent firing of rockets from Gaza has made a dash to shelter a daily routine for hundreds of thousands of Israelis. Launched largely at Israel’s south and the Tel Aviv metropolitan area, many of the rockets have been shot down by Iron Dome.

A statement from the Israeli military said the operation will include “infantry, armoured corps, engineer corps, artillery and intelligence combined with aerial and naval support.”

It said another 18,000 reserve soldiers would be mobilised to join more than 30,000 already called up.

Hamas wants Israel and Egypt, whose military-backed government is at odds with the Islamist movement, to lift border restrictions that have deepened economic hardship among Gaza’s 1.8 million populace. Hamas is also suffering from a cash crunch, unable to pay its employees in Gaza for months.

Fighting resumed immediately after the end of a five-hour humanitarian truce on Thursday requested by the United Nations to allow Palestinians to stock up on food.

Before dawn, about a dozen Palestinian fighters tunnelled under the border, emerging near an Israeli community. At least one was killed when Israeli aircraft bombed the group, the military said.

While tunnel-hunting incursions would be far short of a full-scale invasion and reoccupation, there is still the danger for Israel that risky and time-consuming missions could fall to Palestinian ambushes.

Hamas leaders have talked up their “tunnel campaign” against the Israeli enemy. One publicity video showed Palestinian fighters hauling rockets through a narrow passage to load onto a launcher that appears buried in an orchard. It is then fired remotely after its mechanised cover slides open.

French Foreign Minister Laurent Fabius will visit the Middle East from Friday to Sunday to try to defuse the situation, and will discuss putting a European mission on the Gaza-Israel border, a diplomatic source said on Thursday.

Fabius will meet Palestinian President Mahmoud Abbas in Egypt and Netanyahu in Israel among other leaders, the source said.