Life in Gaza: Search for safety, or wait for destiny 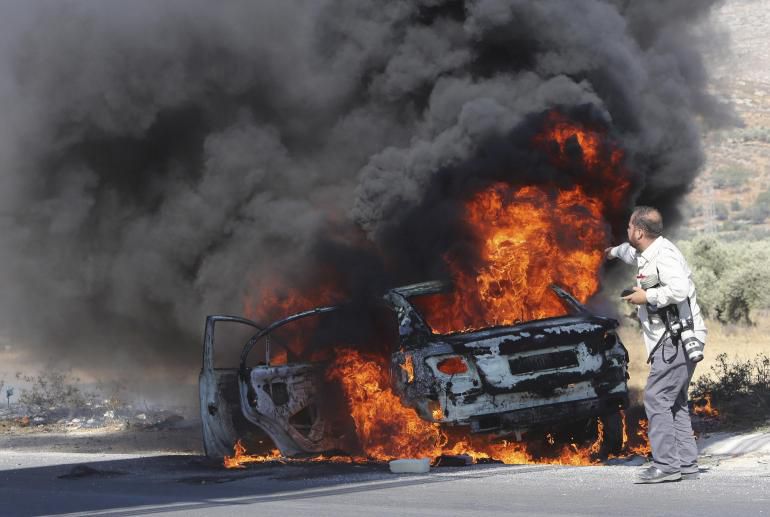 Israeli airstrikes continue in Gaza as Hamas is thwarted by Israel’s Iron Dome. See our timeline of the entire conflict
Share:

Gaza – On a typical day in Gaza, Bakir Bidwan delivers fruit and vegetables with his cart and trusty burro to the neighborhoods of Shujayya and Zeitoun.

Today, he’s carrying the most precious cargo of all.

The only thing Bidwan could fit on his wooden cart is his family.

Thirteen people hold on as the donkey moves down the road: Bidwan, his wife, sister and 10 small children with untamed, sun-kissed hair.

Asked if they are afraid, the 31-year-old Bidwan says, “We feel we are already dead.”

His youngsters are smiling, seamlessly unaware of the danger they’re in, which is a sharp contrast to their mother’s red, shell-shocked eyes of reality.

They tell us they left their home just an hour ago. The previous night automated calls from the Israeli military and leaflets dropped by the Israeli Air Force on these neighborhoods located in the east warned of impending bombings to begin at 9 a.m. the following day. The war between Israel and Gaza militants is entering its 10th day.
Their donkey strains against the weight of the load as they move to their final destination, a United Nations-run school that has been turned into temporary shelter and, more importantly, safety.

For many Gazans, the search for safety means packing whatever they can into cars, buses and trucks to flee the impending bombings.

Almost like clockwork plumes of black smokes billow above Shujayya. The neighborhood’s main market is closed. Almost all the stores have their metal shutters down and padlocks clasped tight. Typically those shops would be bustling as families prepare to break the fast during the Islamic holy month of Ramadan.

Scrambling in the shadow of the explosions, mothers and fathers are looking for alternative places to buy last-minute items for their children.

Fifty-five-year-old Um Mohamed walks quickly down the sidewalk carrying bags of fruits and vegetables. The sweat on her brow mixes with the tears in her eyes.

“What can I do?” she asks. “We ran out of food so I had to leave my daughter-in-law to take care of the kids.”

Um Ali left her two girls at home, crying, to buy food and medicine. She refused to evacuate.

“The Israelis told us to leave our home by leaflets and phone calls but I have nowhere to go … we will not leave, it is our destiny,” she says.

Then there is Atef Al Somery who cracks a smile of relief. He just finished evacuating 20 members of his family from their home. “We are fed up with this frightening situation but at the same time we need them to open the border so we can work and feed our families,” the 57-year-old says.

Many people we talk to despise the war but their anger is eclipsed only by Gaza’s current state of affairs.

For that, they blame Israel

Gaza has been called the world’s largest open-air prison. It’s been like that since Hamas took control of it back in 2007. The only real exit for Gazans is the Rafah border crossing with Egypt, which is rarely open. Importing items from Israel is heavily restricted, so is access to the sea.

At the U.N.-run school are scores of refugees who’ve fled their neighborhoods. There is a sense of security within the blue and white walls of the compound.

Here we find a crowd surrounding a lady crying hysterically. Between the tears, Umm Ahmed tells us how she returned to her house just as the sun illuminated the concrete structure demolished.

Two plastic bags carry all the possessions she could salvage. She screams, thanking God she left the previous day. But despair sets in for the mother of three.

Later at the same school, Bidwan is in his new accommodations, a fourth-floor classroom. His ride is left with the other donkeys and horses tied up at the main gate. He is settling in with his new neighbors. His children are still smiling, this time because they have new playmates.