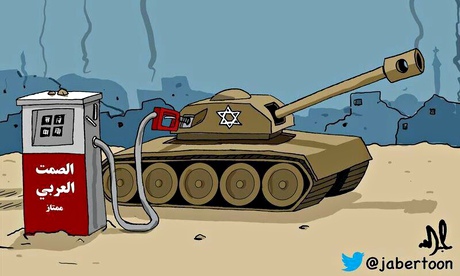 A detail from Saudi cartoonist Jabertoon’s take on the the latest conflict between Israel and Gaza. The petrol pump reads: ‘Arab silence’. Photograph: Jabertoon
Share:

By: Ian Black in Damascus

Gaza’s suffering in the latest round of conflict with Israel has prompted anger and condemnation but little action across the Arab world – where cartoonists are savaging the failure of governments to help the Palestinians, and criticising ordinary people for being too preoccupied by the World Cup to care.

Israel is the main target of Arab fury, along with US support for it. But there is criticism too of the paralysis of the Arab League, whose history has been bound up with the Palestinian issue but which has yet to meet to discuss the crisis. In a cartoon by Jabertoon, an Israeli tank is shown being refuelled at a petrol pump marked “Arab silence”. 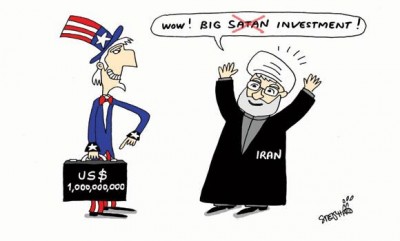 Other images circulating on social media highlight the imbalance in the attention paid to the human cost of the violence – 100 Palestinians reported killed and no Israeli fatalities.

Official Arab responses have been fairly muted, partly because of the hostility of Saudi Arabia and Egypt towards Hamas, which rules the Palestinian coastal enclave and is firing into Israel. Jordan has attacked what it called “barbaric aggression” against Gaza, but, like Egypt, is unlikely to jeopardise its peace treaty with Israel. Turkey has warned Israel that escalation could lead to “chaos in our region”, while further afield, Iran lambasted “savage aggression by the Zionists”.

Three rockets were fired from Lebanon on Friday morning but caused no casualties. Israel’s military said it was trying to determine whether the attack was symbolic or “something more substantial”.

For decades Palestine was the touchstone of pan-Arab solidarity but since the 1973 war, that has meant little more than posturing. All 21 members of the Arab League have formally endorsed a 2002 Saudi plan for peace – based on Israel’s withdrawal to the 1967 borders. The split between the PLO and Hamas in 2006 weakened the Palestinians, but wider divisions since the start of the Arab spring uprisings in 2011 have damaged the cause even further.

The Arab world was busy dealing with its own problems in November 2012 when Israel launched the eight-day Operation Pillar of Defence against Gaza, killing 130 Palestinians. Now, the regional situation is even worse as the stunning advances by Isis fighters in Iraq have morphed into the war in neighbouring Syria.

State media in Damascus hurl abuse at Saudi Arabia and Qatar for backing the jihadists who are trying to overthrow President Bashar al-Assad while doing nothing to help the Palestinians. The same point was made this week by Assad ally Hassan Nasrallah, leader of the Lebanese Shia organisation Hezbollah. 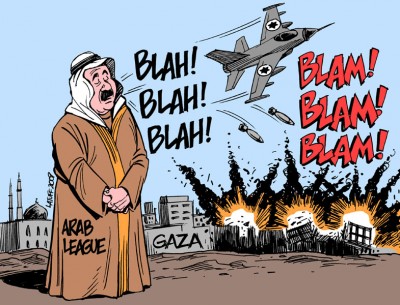 This view is held beyond the militant “axis of resistance” of Iran, Syria and Hezbollah. “The Zionists are hitting Gaza,” says a man in a cartoon by the Egyptian Amr Okasha. A second man, a bearded, turbaned jihadist with the black flag of Isis, pauses before slitting the throat of his terrified victim, and says: “We’re busy, we only slaughter Arabs.”

Tishreen, a Syrian state newspaper, headlined its front page on Friday with reports about the Israeli offensive alongside news from northern Syria about the “noose tightening around the necks of Wahabi mercenaries” – a reference to the hated Saudis. Assad’s enemies counter that he uses Palestine to bolster his Arab nationalist credentials and as a distraction from the brutalities of his regime. Anti-Assad Twitter users noted that the Shifa hospital destroyed by heavy bombing this week is in Aleppo – not the Gaza City hospital of the same name.

And football mania is not the only problem. In “rescuing Gaza” the Saudi cartoonist Aimantoon drew a pampered teenager gorging on fries and fizzy drinks while gazing tearfully at the thousands of “likes” on a Facebook page in support of Gaza. A Libyan tweeted in a similarly critical vein: “Don’t worry people of Gaza, Arabs around the globe are going to change their avatars and profile pictures to help you.”