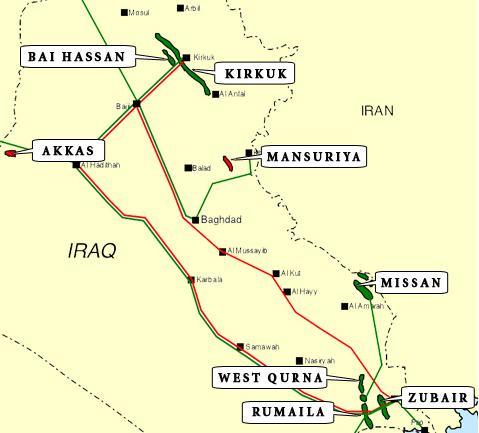 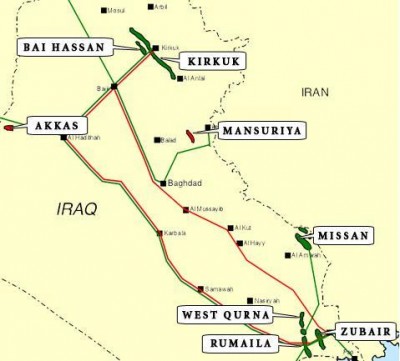 The moves escalated a feud between the Shi’ite-led central government and the autonomous Kurdish region driven by a Sunni insurgency which threatens to fragment Iraq along sectarian and ethnic lines three years after the withdrawal of U.S. troops.

The Kurdish forces took over production facilities at the Bai Hassan and Kirkuk oilfields near the city of Kirkuk, the oil ministry in Baghdad said. It called on the Kurds to withdraw immediately to avoid “dire consequences”.

Kurdish forces took control of nearby Kirkuk a month ago after Iraqi troops withdrew in the face of a lightning assault by Islamic State militants, who have seized large parts of northern and western Iraq.

The two oilfields have a combined production capacity of 450,000 barrels per day but have not been producing significant volumes since March when Baghdad’s Kirkuk-Ceyhan export pipeline was sabotaged.

An oil ministry spokesman in Baghdad described the takeover as dangerous and irresponsible.

“We ask the people responsible for this disorderly behaviour to withdraw immediately from these sites in order to avoid dire consequences,” the spokesman, Asim Jihad, said.

Kurdish authorities said they had moved to “secure the oilfields of Bai Hassan and the Makhmour area” of the giant Kirkuk oilfield after hearing that the oil ministry planned to disrupt a pipeline designed to pump oil from Makhmour.

Bai Hassan and the Makhmour part of the Kirkuk oilfield had been under the control of the state’s North Oil Company (NOC).

“The Kurdish Regional Government learned on Thursday that some officials in the federal Ministry of Oil gave orders to a number of NOC staff to cease their cooperation with the KRG and to dismantle or render inoperable the valves on the new pipeline,” the Kurdish authorities said in a statement.

“The nearby Bai Hassan field and the other fields located in Makhmour district are now safely under KRG management,” it said.

The statement said NOC staff had been told they should cooperate with Kurdish authorities from Saturday or leave and that any production at the fields seized by the Kurds would be used primarily to supply the domestic market.

The Baghdad ministry’s spokesman Jihad rejected Kurdish assertions that they had acted to protect oil infrastructure, saying the ministry had worked to raise output at the fields and increase investment in local gasoline production.

“The ministry rejects their irresponsible accusations as these workers are doing their best in order to supply the gasoline,” he said. “Such a statement is ridiculous.”

Efforts to reach agreement on a new government in Baghdad to confront the insurgents have been complicated by the tensions between Maliki and the Kurds. The United States, the United Nations and Iraq’s own Shi’ite clerics have urged lawmakers to form a new government swiftly to deal with the Sunni insurgency.

The first session of the national parliament elected in April took place last week but failed to reach agreement on nominations for the top three government posts. The second had been due to be held on Tuesday but was delayed until Sunday.

The relationship hit a new low this week when Maliki accused the Kurds of allowing their capital to be used as a base for the Islamic State and others, including former members of Saddam Hussein’s now-banned Baath Party.

In protest against the accusation, the Kurdish political bloc announced they were suspending their participation in the Baghdad government on Friday. Foreign Minister Hoshiyar Zebari said the Kurds would continue to attend parliament.

Zebari, who is a Kurd, said Iraq risked falling apart if a new inclusive government is not formed soon as “the country is now divided literally into three states – “Kurdish, a black state (ISIL) and Baghdad”. [ID:nL6N0PM2G5]

Unless Iraqi leaders rose to the challenge “the consequences are very dire: complete fragmentation and failure” of the country, he said.

said the suspension decision would be re-evaluated if Maliki apologised for his comments.

Egyptian Foreign Minister Sameh Shukri met Maliki in Baghdad on Friday to stress Cairo’s support for efforts to avoid “the threat (of) sectarian confrontation and the spread of extremism and terrorism in the name of religion”.

A spokesman for Kurdish leader Barzani said Maliki, who is seeking a third term in office in the face of political opposition, “has been afflicted by a true hysteria”.

The increasingly bitter political accusations prompted the country’s senior Shi’ite cleric on Friday to urge Iraq’s leaders to end their bickering and for fighters to respect all Iraqis regardless of sect or ethnicity.

“We have repeatedly called for the closing of ranks and for unity and to refrain from radical discourse,” Grand Ayatollah Ali Sistani said in a sermon delivered by an aide.

Sectarian rhetoric from politicians had already incited Iraqis and could destabilise things even further, he said.

Tens of thousands of people responded to a call from Sistani on June 13 to take up arms against the Sunni insurgency.

Fighters should “not … transgress against any innocent citizen, no matter their sectarian or ethnic affiliation or whatever their political stance,” aide Abdul Mehdi Al-Karbala’i told worshippers at the Imam Hussein shrine in the Shi’ite holy city of Karbala.

A senior Iraqi Shi’ite politician has told Reuters that in the first week after Sistani’s call, Sunnis were killed by militia that had quickly mobilised. They had now been brought under control.

But there have been continued reports of disappearances and suspected mass killings. On Wednesday, south of Baghdad, Iraqi security forces found 53 corpses, blindfolded and handcuffed, with bullets to the chest and head.

Locals found the corpses of three men on Friday in Injana village near the town of Adaim, north of Baghdad in Diyala province, a police officer told Reuters. The bodies were apparently dumped on the street.

A medical source said the men had been killed recently because their bodies had not decomposed. The area is mainly Sunni. The identity of the dead was not immediately clear, the police officer said.

Baghdad had seen few attacks compared to the violence in other areas hit by the Islamic State’s offensive last month, though bombs still hit the capital on a fairly regular basis.

In the predominately Shi’ite district of northern Baghdad, three civilians were killed by a roadside bomb on Friday afternoon, police and medics said.