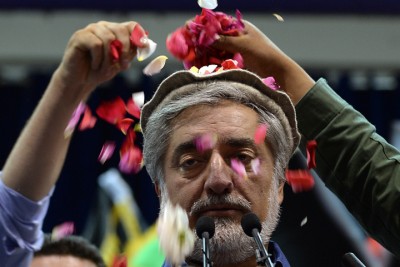 Abdullah Abdullah, an Afghanistan presidential candidate, showered with rose petals by supporters. Photo: AFP/Getty Images
Share:
By Amir Taheri
War-torn Afghanistan is on the brink of a new crisis fuelled by ethnic and sectarian enmities that could upset President Obama’s time­table for US military withdrawal and open the way for a fresh campaign of terror by the Taliban.
The preliminary results of the presidential runoff show Ashraf Ghani Ahmadzai, the candidate backed by incumbent President Hamid Karzai, ahead with 56 percent of the votes to 44 percent for opposition candidate Abdullah Abdullah.
In the first round held in April, Ghani trailed Abdullah by almost 10 percent.
Abdullah charges that the official runoff results indicate “fraud on a massive scale,” presumably perpetrated by local authorities with a wink and a nod from Karzai’s administration.
Abdullah’s camp has lodged protests to the Election Commission concerning over 2,000 polling stations and some 1.2 million votes. He has declared victory and threatens to form his own government, but is holding off for now.
Complicating the situation is that both candidates enjoy genuine support within clear ethnic and religious constituencies.
Hailing from a major Pushtun clan, Ghani won most of the votes from his community, some 38 percent of the Afghan population. He also drew massive support from the ethnic Uzbeks after making one of their leaders, Gen. Abdul-Rashid Dostum, his running mate.
For his part, Abdullah ran very well among his Tajiks, 32 percent of the population, and among the Hazara thanks to his own running mate, Mohammed Mohaqiq.
It seems clear that whoever actually wins would do so by a whisker, and not by the huge margin that the Election Commission credits Ghani with.
Outside the melting pot of Kabul, most Afghans seem to have voted in accordance with traditional tribal loyalties.
The Pushtuns aren’t prepared to relinquish their hold on government, having ruled Afghanistan ever since it was shaped as a state some 80 years ago.
(One Afghan king, Habiballah Kalakani, was an ethnic Tajik; he ruled for only eight months in 1929. Even when Communists seized power in 1977, power remained firmly in Pushtun hands.)
An Abdullah victory would not only alter the ethnic balance of power but could also reshuffle religious cards: His running mate Mohaqiq’s Hazara community is doubly despised by Pushtuns because of its Mongol ethnicity and Shi’ite faith.
To add further complexity, regional powers back rival blocs. Pakistan, China and Saudi Arabia favor Ghani; Iran, Russia and India see Abdullah as a potential ally.
While Obama has tried to script Washington out of the Afghan imbroglio by fixing a withdrawal date, the only power still capable of bringing the two rival blocs together is the United States.
Afghans on both sides of the political divide distrust the regional powers, especially Russia, Pakistan and Iran.
Ghani would not cherish falling under a Pakistani-Saudi umbrella, and the last thing that Abdullah wants is to rely on the Khomeinist regime in Iran — let alone Russia, the power he fought for more than a decade during the Communist occupation.
Nor is this Iraq where opposing sects and ethnic communities were forced into a shotgun marriage by the British Empire.
The various Afghan communities came together to define a new state identity after splitting from the Persian Empire. They are not streams that flow away from one another; they are streams flowing into the same river.
Both Abdullah and Ghani would welcome a helping hand from the United States, as Sen. John McCain learned during his recent visit.
By reaffirming its commitment to democratization in Afghanistan, Washington could play a crucial role in bringing the two sides together in a quest for compromise.
Instead of issuing threats about cutting US aid, Secretary of State John Kerry should go to Kabul and offer his good offices as an honest broker.
In Kabul today, there are plenty of ideas regarding how to avoid a major crisis or even civil war that would only benefit the Taliban and other terrorist groups.
The United States should make its own contribution to putting those ideas into practice.