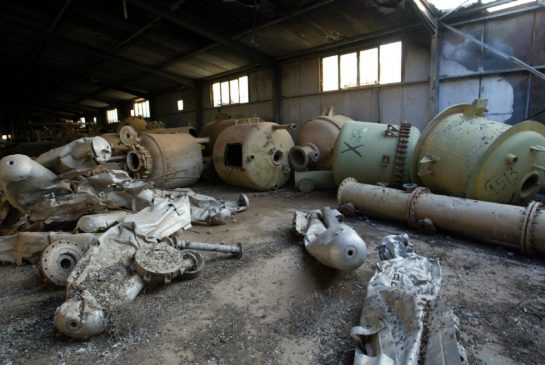 The Islamic State extremist group (Isis) has taken control of a vast former chemical weapons facility north-west of Baghdad, where 2,500 degraded chemical rockets filled decades ago with deadly nerve agent sarin or their remnants were stored along with other chemical warfare agents, Iraq has said in a letter circulated at the United Nations.

The US government played down the threat from the takeover, saying there were no intact chemical weapons and it would be very difficult to use the material for military purposes.

Iraq’s UN ambassador, Mohamed Ali Alhakim, told the UN secretary-general, Ban Ki-moon, in a letter that “armed terrorist groups” entered the Muthanna site on 11 June, detained guards and seized their weapons. The following morning, the project manager spotted the looting of some equipment via the camera surveillance system before the “terrorists” disabled it, he said.

Isis, which controls parts of Syria, sent its fighters into neighbouring Iraq last month and quickly captured a vast swath of territory straddling the border between the two countries. Last week, its leader, Abu Bakr al-Baghdadi, declared the establishment of an Islamic state, or caliphate, in the land the extremists control.

Alhakim singled out the capture of bunkers 13 and 41 in the sprawling complex 35 miles (56 km) north-west of Baghdad in the notorious “Sunni Triangle”.

The last major report by UN inspectors on the status of Iraq’s weapons of mass destruction programme was released about a year after the experts left in March 2003. It states that bunker 13 contained 2,500 sarin-filled 122mm chemical rockets produced and filled before 1991, and about 180 tonnes of sodium cyanide, a very toxic chemical and a precursor for the warfare agent tabun.

The UN said the bunker was bombed during the first Gulf war in February 1991, which removed Iraq from Kuwait, and the rockets were “partially destroyed or damaged”.

It said the sarin munitions were of poor quality and would largely be degraded after years of storage. It added that the tabun-filled containers were all treated with decontamination solution and likely no longer contain any agent, but “the residue of this decontamination would contain cyanides, which would still be a hazard”.

According to the report, bunker 41 contained 2,000 empty 155mm artillery shells contaminated with the chemical warfare agent mustard, 605 one-tonne mustard containers with residues, and heavily contaminated construction material. It said the shells could contain mustard residues that cannot be used for chemical warfare but remain highly toxic.

US state department spokeswoman Jen Psaki expressed concern on 20 June about Isis seizing the complex, but played down the importance of the two bunkers with “degraded chemical remnants”, saying the material dates back to the 1980s and was stored after being dismantled by UN inspectors in the 1990s.

She said the remnants “don’t include intact chemical weapons … and would be very difficult, if not impossible, to safely use this for military purposes or, frankly, to move it”.

The Muthanna facility, south of the city of Samarra, was Iraq’s primary site for the production of chemical weapons agents. After the end of the first Gulf war, UN weapons inspectors worked there to get rid of chemicals that could be used in weapons, destroy production plants and equipment, and eliminate chemical warfare agents. The UN inspectors left just before the US invasion of Iraq in March 2003 and never returned. The US-led Iraq Survey Group then took over the search for Iraqi weapons of mass destruction and found none.

News of the facility’s takeover came amid continued political uncertainty in Iraq as leaders must agree on a new government that can confront the militant offensive that has plunged the country into its worst crisis since the last US troops left in 2011.

Iraq’s parliament on Tuesday officially rescheduled its next session for Sunday after it was criticised for earlier plans to take a five-week break.