Another Iranian Killed in Samarra, Iraq 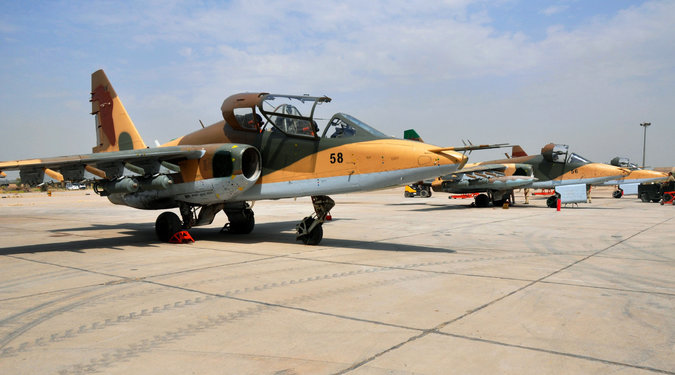 Russian Sukhoi Su-25 planes on the tarmac at Al Muthanna military base in Baghdad last week. The planes were sent from Iran. Credit Reuters
Share:
An Iranian Revolutionary Guards member was among the 108 people killed across Iraq today. Another 41 were wounded.

Three Russian-made attack planes have been delivered to Iraq from Iran. Iran claims that the jets were actually three of the seven jets that Iraq sent to Iran for safekeeping during the Persian Gulf War. If not, Iraq could be violating international sanctions against buying arms from Iran.

Parliament moved up meeting again to July 13, nearly a month earlier that expected.

Iraq notified the United Nations that it cannot fulfill its obligation to destroy chemical weapons because militants took over a former chemical weapons depot last month. The seizure of the depot was already public knowledge. It is believed that any chemicals remaining there are too old to be effectively used.

Although it seems that few soldiers and volunteers are being killed during fighting with militants, bodies have been arriving in Najaf for burial.

The southern provinces could be gearing up for Shi’ite-on-Shi’ite violence.

Witnesses in Mosul report that between 25 and 60 men, former Ba’athists within the Saddam regime, were rounded up by militants. Their fate is unknown as are the reasons behind the roundup. Some believe that the militants are getting rid of potential rivals for power. Five civilians were killed and 11 were wounded during air strikes.

An Iranian Revolutionary Guard member was killed in fighting in Samarra. A roadside bomb south of the city killed three policemen and two civilians; anotherseven were wounded. West of the city, another bomb killed three federal police and wounded two more.

In Baghdad, a suicide bomber was shot to death in Doura. A pair of roadside bombswounded five civilians. A dumped body was found in Saidiya. In Fahhama, anotherbody was found. A policeman was shot dead in Ghazaliya.

Thirty militants were killed and five civilians were wounded during an air strike onShirqat.

Forty militants were killed during operations in the villages of Yusufiya andRashidiya, just south of Baghdad.