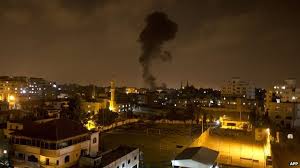 Palestinian militants fired dozens of rockets from the Gaza Strip into southern Israel on Monday evening, officials said, as the Israeli military sent more forces to the border and called up army reservists in the escalating crisis.

Israel said early Tuesday that its military has launched what could be a long-term offensive against the Hamas-ruled Gaza Strip, striking at least 50 sites in Gaza by air and sea and mobilizing for a possible ground invasion, the Associated Press reported.

The army said its offensive, dubbed “Operation Protective Edge,” is aimed at striking Hamas and ending the rocket fire that has intensified in recent weeks.

The rocket barrage came as Israeli police and intelligence authorities questioned six Jewish suspects in last week’s killing of a Palestinian teenager in Jerusalem that sparked violent protests. The 16-year-old Palestinian was abducted, beaten and burned in what many believe was a revenge attack after the bodies of three missing Israeli teens were found in a field in the West Bank.

Capping a day of attacks, Palestinian militants fired 40 rockets in one hour late Monday, setting off air raid sirens in communities as far as 50 miles from the Gaza Strip, Israeli military officials said. A dozen rockets were intercepted by the Iron Dome air defense system and about 30 struck open areas, officials said.

Rocket fire intensified Monday after the deaths overnight of at least six members of the Palestinian organization Hamas, which controls the Gaza Strip, during Israeli airstrikes, prompting threats of revenge.

“This is a serious escalation and the enemy will pay the price,” Hamas spokesman Sami abu Zuhri said.

These come in addition to two infantry brigades currently deployed for defensive assignments. The troops are prepared to “take it a step up” if matters deteriorate further, Lerner said. He emphasized that at this point “there are no orders to mobilize ground troops” for an invasion of Gaza.

Public gatherings and summer vacation camps in unprotected areas were called off in southern Israeli towns and cities within rocket range, and Tuesday’s classes at the Ashkelon Academic College were canceled.

Israel blames Hamas for the recent abduction and killing of the Israeli teenagers and continues to search the West Bank for two suspects.

About 200 rockets have been fired from Gaza since the teens were abducted and killed June 12. Many residents of Israel’s south are demanding that the government take military action to stop the rocket attacks.

Netanyahu has held a series of meetings with Cabinet ministers widely divided on how to address the rocket threat. Some demand a comprehensive military operation, but others advise caution.

Israel’s reaction in recent weeks has been restrained compared with some previous flare-ups.

Fierce political and public pressure over how to handle the rocket fire and Hamas in Gaza took a toll on Netanyahu’s ruling coalition Monday, as Foreign Minister Avigdor Lieberman announced he would dissolve the partnership with Netanyahu that merged their two factions into a super-party for the 2013 elections.

Lieberman is calling for a military operation in Gaza to topple Hamas’ rule and has criticized Netanyahu’s approach.

Also Monday, Netanyahu reportedly called Hussein Abu Khdeir to express condolences for the loss of his 16-year-old son, Mohammed, who was abducted, beaten and burned to death in an apparent act of vengeance.

“I would like to express my outrage and that of the citizens of Israel over the reprehensible murder of your son,” the prime minister reportedly said.

In their interrogation of the six Jewish suspects arrested Sunday, investigators worked to determine what part each may have played in the killing or planning, police spokesman Micky Rosenfeld said Monday.

Local media reported that three of the suspects had confessed and reenacted the killing, revealing that one part of the group carried out the killing while the other provided assistance. Several suspects reportedly have been sent for psychiatric evaluation.

Israeli society wrangled with its homegrown terrorism, some calling for a long, hard look at the education system and racist vitriol raging on social media platforms.

Managers of the popular news and entertainment website Mako decided to tighten moderation of reader response comments to prohibit racism on the site.

Even with screening kept light to avoid censorship and allow freedom of expression, “we throw out hundreds if not thousands of comments a day,” site editor Itay Waldman told Army Radio on Monday. He added that the level of abusive and racist language has risen in recent years.
LA Times