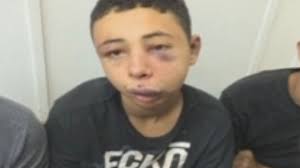 The U.S. has confirmed that Tariq Khdeir, an American teenager, has been arrested by Israeli authorities and the State Department has expressed concern that he has been “severely beaten.”

ITV news says Khdeir is the 15-year-old cousin of Muhammad Abu Khdeir, a 16-year-old boy who was murdered in Jerusalem on Wednesday in what Palestinians say is revenge attack for the kidnapping and killing of three Israeli teens last month.

ITV says Tariq Khdeir attends high school in Tampa, Fla. He was beaten on Thursday in an attack that was caught on video. The assailants appear to be Israeli police officers.

“We are profoundly troubled by reports that he was severely beaten while in police custody and strongly condemn any excessive use of force,” State Department spokesperson Jen Psaki said in a statement.

“He was visited by an official from the U.S. Consulate General in Jerusalem today,” Psaki said.

“We are calling for a speedy, transparent and credible investigation and full accountability for any excessive use of force,” she said.

In an interview with ABC News, Tariq’s mother called her son’s treatment at the hands of Israeli authorities an “attempted murder.” She said her son had been on a summer holiday visiting family in east Jerusalem.

“Photos of him in detention show his severely swollen and bruised face, which his mother, Suha Abu Khdeir, said was unrecognizable when she first saw him following the arrest.”
“‘I could not believe it,’ she told ABC News. ‘When I finally looked over at him, it was a feeling that I’ve never felt before in my life.'”
Israeli police dispute the video, which a spokesman told ABC was “edited and biased” and “does not represent the events.”