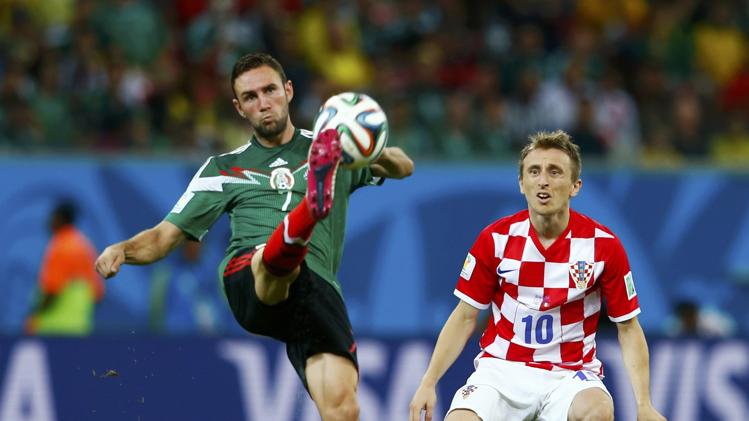 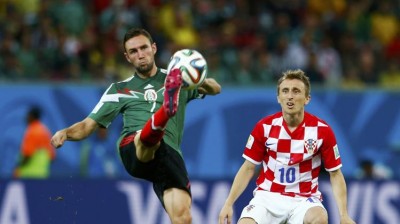 The Lebanese have few things to celebrate these days. The country has been gripped for the past weeks by a spate of suicide bombings, political upheaval and a raging civil war next door in Syria. But at least for few hours Sunday, this tiny Mediterranean country had something to cheer about.

Miguel Layun, playing for Mexico in the World Cup, is of Lebanese origin.

In Beit Milleit, his northern Lebanese ancestral village, dozens of people gathered in front of a giant TV screen to cheer him on.

The 26-year-old player’s posters were hung everywhere in this tiny Christian hamlet in the impoverished Akkar region. In the village’s main square about 100 people sat in front of the screen.

“Nearly 90 percent of the people here support Mexico because of Miguel,” said banker Simon Layun, a second cousin of the Mexican player.

Some munching on snacks and soft drinks, others smoking water pipes, the crowd jumped up and down, danced and cheered every time Mexican players were near the Netherlands goal.

Whenever Layun had the ball the crowd screamed and clapped, breaking into shouts of “Miguel, Miguel!”

Their support was not enough, however. Mexico led until the last few minutes, when the Netherlands scored two quick goals to win.

“I had read about it, and I really appreciate it (the support),” the Mexico defender said after the game. “It’s people that I always have in my heart, and they deserve it. I’m very happy to know about this (their support), and it’s a shame that today I couldn’t bring them more happiness.”

Lebanon, with a population of 4.5 million people, has seen waves of emigration over the past century to different parts of the world, mostly to Latin America where there are more people of Lebanese origin than in Lebanon itself.

Brazil has the largest number of Lebanese descendants in the world while in Mexico there is a large community of people of Lebanese origin including billionaire Carlos Slim, who is one of the richest people in the world, and Mexican actress Salma Hayek.

Although most Lebanese are supporters of either Brazil or Germany in the World Cup, many hoped Mexico would win Sunday’s match.

The World Cup commentator on state-run Tele Liban said having someone of Lebanese origin playing in the World Cup is a “dream” that makes every Lebanese proud, calling on Layun to return to his roots and visit the “Land of the Cedars.”

Jerjes al-Saifi, the mayor of Beit Milleit, which has a population of 2,000 people, said thousands of people from the village emigrated mostly to Mexico and Brazil over the past century.

Speaking in a courtyard decorated with Lebanese and Mexican flags as well as posters of Layun, the grey-haired man said that after Lebanon’s 15-year civil war began in 1975, emigration from the village shifted to countries like Canada and Australia.

The house of Layun’s grandfather, Youssef, who emigrated to Mexico looking for opportunities abroad, is still there, deserted. A second cousin, Elie Layun, said he lived in it for some years until he built his own house.

Elie said Miguel had never visited the village although his parents did years ago.

Among those watching the match Sunday was Antoinette Abdul-Maseeh Jeitani, a Mexican-Lebanese who is currently visiting her home country.

“I always supported Mexico but because of Miguel I support it more,” said Jeitani, who lives in Mexico City’s Colonia del Valle neighborhood.

The late penalty that sealed the Netherlands victory left the crowd heartbroken.

“It’s too bad, Mexico played very, very well. The penalty was not fair,” he said.

Roger Jeitani, a 54-year-old owner of a music shop, was the lone Netherlands supporter in the village, saying he has been a supporter of the Netherlands for 30 years.