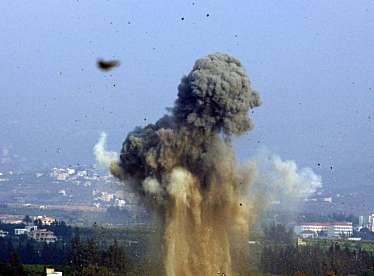 Israeli forces attacked militant targets in the Gaza Strip on Sunday, killing a Hamas gunman and wounding two others after a spate of rocket launches from the Palestinian territory, officials on both sides said.

The Hamas casualties were caused by a strike that the Israeli military said targeted a group of Palestinians spotted about to fire a rocket across the border.

Palestinian medics said two other people were wounded in air strikes on at least six other Gaza targets.

The Israeli military said two rockets fired from Gaza earlier on Sunday were shot down by its Iron Dome missile interceptor defence system.

On Saturday rockets set a factory on fire in the southern Israeli town of Sderot, wounding three people, officials said.

“Over the weekend, the Israel Defense Forces attacked multiple targets in response to firing at Israel from the Gaza Strip,” Prime Minister Benjamin Netanyahu said in public remarks to his cabinet on Sunday. “We are ready to expand this operation, if necessary.”

Hamas, an Islamist movement that seized the Gaza Strip from forces loyal to Western-backed Palestinian President Mahmoud Abbas in 2007, signed a reconciliation deal with him in April under which a unity government was formed on June 2.

Since the beginning of June, militants in the Gaza Strip have fired at least 62 rockets at Israel in attacks that have caused few injuries, the Israeli military said.

In Gaza, Israeli air strikes have totalled more than 80 this month and killed three militants and wounded more than a dozen other people, Palestinian officials said.