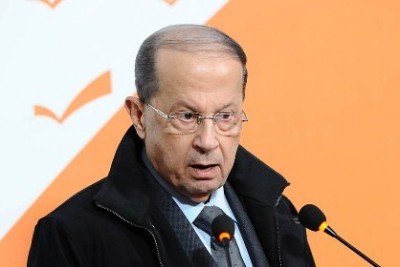 Free Patriotic Movement chief Michel Aoun called on Monday for amending the constitution to allow the voters to directly cast ballots for the head of state in an attempt to resolve the presidential deadlock.

He is proposing that the election of the head of state to be done in two stages,  to avoid the same scenarios that parliamentary sessions are witnessing.

Aoun, who launched his initiative during a press conference he held at his residence in Rabieh stressed that his proposal would “free the presidential elections from external factors.”
He suggested that in the first stage, Christian voters should choose two candidates, and in the second stage, all Lebanese citizens would vote to choose on of the two.

Aoun is linking his proposal to the parliamentary electoral law .

He said that his initiative should be linked to the so-called Orthodox Gathering electoral draft law, in which citizens would only  vote for MPs of their own sect.

“We should approve an electoral law so that each sect chooses its  own MPs, which would strengthen tranquility and stability,” he said adding ” “Claims that such electoral law would entrench sectarianism are wrong.”

Aoun criticized the Taef accord

Everyone knows that there are gaps in the implementation of the Taef Accord,” he said
“Consecutive electoral laws have given Christians the right to elect only 17 of their MPs,” he stressed.

Parliament failed to elect a president

The Lebanese parliament failed for the seventh time in a row to hold a session to elect the country’s new president to replace Michel Suleiman whose terms ended on May 25.

The vote could not be held in all the sessions because lawmakers allied with the Iranian backed Hezbollah militant group boycotted the voting for lack of agreement on a consensus president.

After Geagea secured 48 votes last April 23, the Hezbollah led March 8 alliance including Aoun and Franjieh walked out from the parliament to make sure there was no quorum to elect a president. They continued their boycott of the parliament during the  other sessions that followed .

Both Aoun and Franjieh boycotted all the  sessions that followed

Aoun has not announced his candidacy but he aspires to become a consensual nominee
“I will announce my nomination when the political situation in parliament becomes clear and when (the current candidates) are dismissed,” Aoun said last week

“It is totally rejected to choose the weakest Christian as president and I will not tolerate this,” he said in reference Geagea without naming him.

“I’m the strongest and I’m the one who represents (the Christians). My popularity is on the rise,” he added.

Both Aoun and Geagea consider themselves the strongest Christian leaders .

Despite his claims, Aoun’s rivals in the March 14 camp have refused to withdraw their support for Geagea, who was the first to announce his candidacy.

“As long as the coalition that is close to our political line supports Aoun, then we too consider Aoun to be a friend of Syria’s, who believed in Syria’s victory over the crisis.”